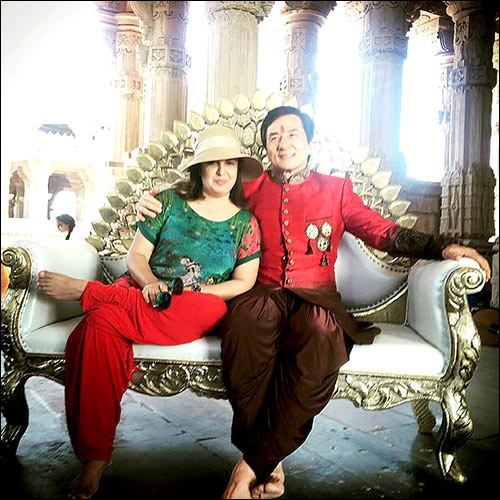 Earlier we had reported that choreographer turned director Farah Khan would be choreographing a song sequence in the currently underproduction Indo-Chinese film Kung Fu Yoga. Well seems like Farah Khan has impressed the martial artist Jackie Chan who features in the film.

Posting an image of her posing with Chan on Instagram, Farah added, "Who could think!! Jackie chan can dance Bollywood!!" Further adding, but this time on twitter, Farah Khan wrote, "The King of action CAN dance n how!! Changing his name 2 Jackie Jackson!! #kungfu yoga".

The Bollywood song which will be shot on a lavish set in Rajasthan and later in Beijing, also stars Sonu Sood and Amyra. As for the film, Kung Fu Yoga is a part of the three-film agreement signed between India and China during Chinese President Xi Jinping's visit to India last year. The multi-lingual action-adventure film recently wrapped up their international schedules in China and Dubai.

The film is being directed by Stanley Tong, who also directed Rumble in the Bronx which also featured Jackie Chan.