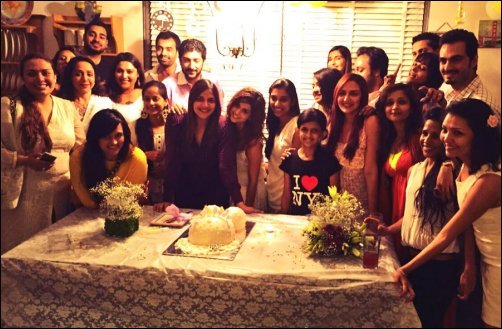 The Deol sisters have yet another reason to rejoice this year. While Esha Deol is back to the world of glamour with 'Roadies' wherein she debuted on small screen as a judge, her sister Ahaana Deol Vohra is all set to embrace motherhood. Ahana who tied the knot with businessman Vaibhav Vohra on February 2, 2014, is expecting her first born and the Deol family is on cloud nine celebrating the moment.

While the veteran actors and the to be grandparents, Dharmendra and Hema Malini are rejoicing the news, Esha Deol threw a baby shower for her little sister. Posting a picture of the party, Esha said, "@Ahaana_D_Vohra @OceansGreen222 my baby sisters baby shower @ChefChinu @dreamgirlhema !" The party was a private affair with close friends and family and was followed by a cake cutting ceremony. From what we hear, Esha had got a cake that had a young woman with a baby bump for the occasion.


On the other hand, we spotted Ahaana Deol Vohra posing with her baby bump in one of the pictures shared on Instagram.


Ahaana Deol has stayed away from Bollywood despite her mother's super stardom and her sister's stint in Bollywood.