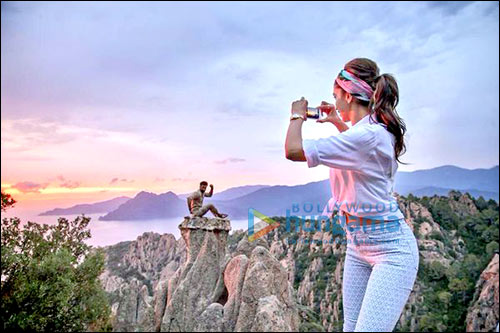 While we have already received various glimpses of the beauty of Corsica in the pictures of Tamasha that have gone viral, here is yet another picturesque location that is a part of the film. The fans, who are eagerly waiting for the film's release, recently posted a picture on micro blogging sites wherein Deepika Padukone is trying to click a snap of Ranbir Kapoor on her phone.


We hear that this is a behind-the-scenes picture wherein Deepika Padukone decided to turn photographer for her co-star Ranbir Kapoor. Apparently, a scene in the film required Ranbir Kapoor to climb on a cliff. Post the shoot, Deepika took to clicking Ranbir's pictures and he decided to go with flow and posed funnily for the snaps.


The duo, who was last seen in the blockbuster Yeh Jawaani Hai Deewani, will play the role of theatre artists who travel to various locations across the world. Directed by Imtiaz Ali and produced by Sajid Nadiadwala, Tamasha is slated to release on November 27. On the other hand, the trailer of the film will be releasing on September 22.