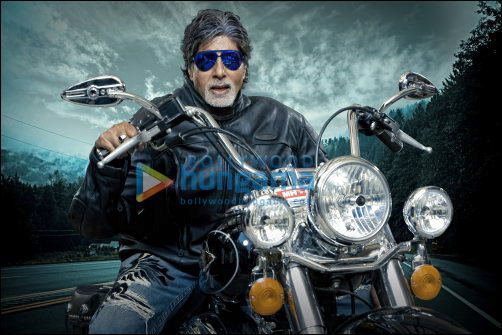 The frenzy for Big B's latest film Buddah...Hoga Terra Baap is gaining momentum with each passing day. Even though the film is a month away from release, the promotions have begun in full swing.

Considering that Buddah...Hoga Terra Baap is produced by AB Corp in association with Viacom 18 Motion Pictures, Amitabh Bachchan is going all out to see that the film gets maximum eyeballs.

While the film's first promo has been hugely appreciated, Bachchan recently tweeted a pic of his riding a Harley Davidson bike in a scene from the film. Bachchan has been styled by Leepakshi Ellawadi for the action flick. She says, "Puri Sir provided me with the dialogues of Bachchan Sir from the movie. He wanted me to make a mental picture of the man after hearing his lingo. And then go about styling the character." After several brainstorming sessions, the team came up with the idea of styling up Big B in a bold, outlandish manner; something that has never been tried on screen with the superstar!


Going by the looks of it, it seems that the 68 year old actor can still give the young guns a run for their money with this cool action film.