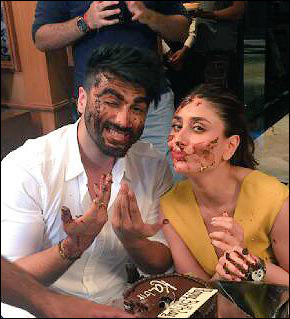 The shooting for R.Balki's upcoming rom-com Ki and Ka seems to be a rollercoaster ride even in real life. The leading stars of the film, namely Arjun Kapoor and Kareena Kapoor Khan seem to be bonding well and have made shooting a fun experience.

Recently, Arjun Kapoor took to Twitter to share a picture with Kareena Kapoor Khan, where the two are not only cutting a cake but have smashed it on each other's faces. Captioning it wittily, Arjun wrote on his Twitter handle saying, "Forget Dubsmash we got Monday morning Cakesmash...cake fest for #KiandKa". Arjun and Kareena have been paired opposite for the first time and their cakesmash debut already seems to have gone viral on the web. Interestingly, Arjun Kapoor had once mentioned that Kareena is one of his favourite actresses.

Ki and Ka is all about breaking gender based stereotypes and also has Amitabh Bachchan and Jaya Bachchan doing a cameo.