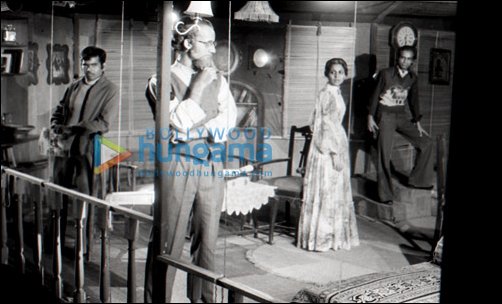 We found this photo of Satish Kaushik and Anupam Kher during their theatre days when they were freshers from the National School of Drama, and thought of sharing it with our surfers. In the picture, Satish Kaushik is on the extreme left, and to his right there is Anupam Kher, Kavita Chaudhary and Pramod Muthu.

When we contacted Mr. Satish Kaushik and asked him about this picture, he told us, "This is a very reminiscent and nostalgic picture. It is from a play we did after our stint at the National School of Drama when we were freelancing as theatre actors in Delhi. The play was directed by Amal Allana. She is a very famous theatre director and is the daughter of Ebrahim Alkazi, who was a great teacher and the first director of the National School of Drama.

"The play was an adaptation of 'Long Day's Journey Into Night', a famous American playwright by Eugene O'Neill. It is a very interesting story of a family and I was playing a very erratic son who is always very angry. Anupam Kher and Kavita Chaudhary played my parents in the play. This was a very great classic play," he added.