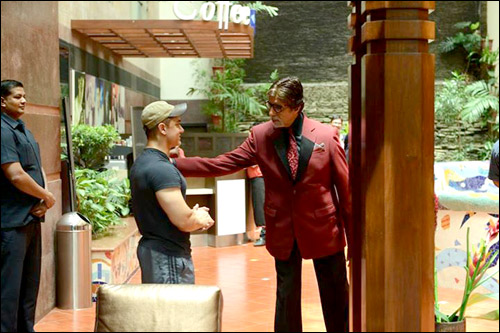 Aamir Khan has been in the headlines of late thanks to his dare bare act for the poster of his upcoming film PK. Though a segment of the audiences has been criticizing the actor, there are others who have been lauding him for his out of the box concept. As the world still debates on this subject, Bollywood has been relatively nonchalant about the same, while the media has been keenly anticipating Aamir's next move.

Recently, Amitabh Bachchan bumped into the Aamir while, the legendary star was at Yash Raj Studios shooting for his famous game show 'Kaun Banega Crorepati'. Posting an image of the meeting on his facebook page, Bachchan posted, "FB 676 - A chance meeting with Aamir Khan as I walk to the sets of KBC to shoot an episode .."

Currently, as Aamir Khan is busy with the promotions of PK, while Amitabh Bachchan has his hands full with two TV shows, Yudh and Kaun Banega Crorepati.