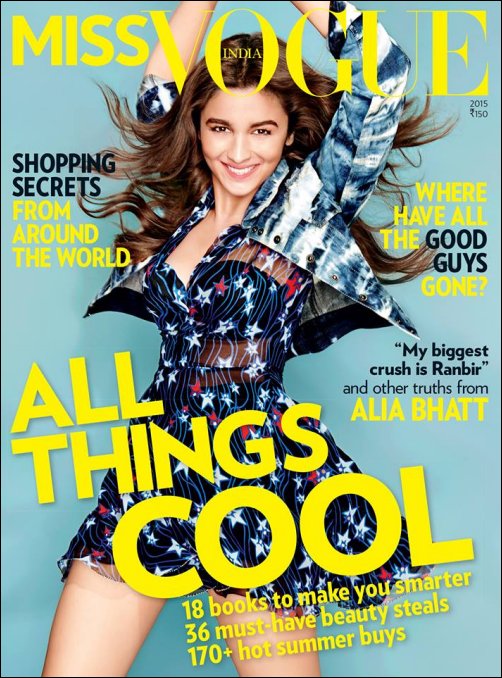 Glamorous and elegant is how one would describe Alia Bhatt's debut role in Bollywood and her image off screen too is equally trendy. The actress has experimented from gowns to funky shorts and her appearances are often termed as new and refreshing and not surprisingly, she has now become Miss Vogue India. The glossy that represents the ideologies of a 21st century girl, has Alia Bhatt as the cover girl for its debut edition which was launched this month.


Playing it cool against the extremely hot climate, Alia Bhatt opts for a stylish spring avatar wherein she features on the cover in a Tommy Hilfiger SS15 short dress with printed stars, pairing it up with Kanika Goyal Label washed denim biker jacket. Nude make-up minus accessories compliments her look. The 'Miss Vogue' gets into uninhibited chat with the magazine wherein she discusses about her biggest critics, fear of failure, about the choices she made and will make and about her biggest crush ever - Ranbir Kapoor.


Keeping up with the summery theme, the magazine also reveals a few secrets for the shopaholics and gives away some interesting beauty tips and deals for this season.