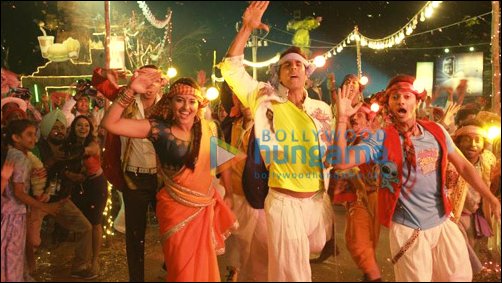 Shirish Kunder's Joker which stars Akshay Kumar, Sonakshi Sinha, Minissha Lamba and Shreyas Talpade is being highly looked forward to as it will be Akshay's first sci-fi 3D film.

Bollywood Hungama came across this image from the film featuring Sonakshi, Akshay and Shreyas in the middle of a dance sequence. Speaking about this sequence, director Shirish says, "Yes, that scene comes basically in the second half of the film when the small town that the three of them live in gets supplied with electricity. The thing is that the town they are living in has no idea of electricity till that time, and this is a kind of celebration for the same."

Joker which is being produced by UTV, Three's Company and Hari Om Entertainment is scheduled for an August release.