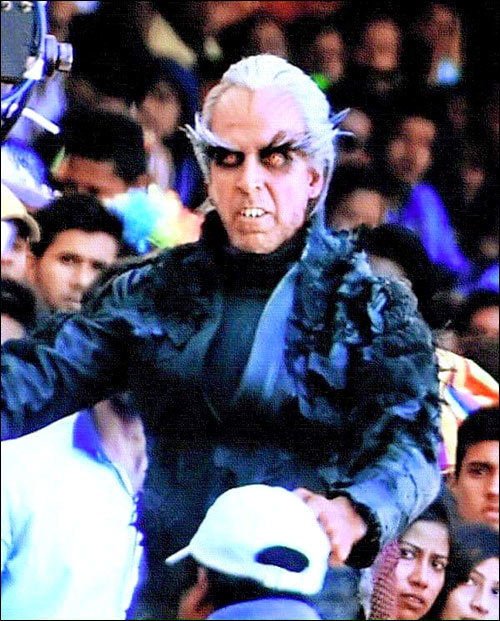 A while back the news that Akshay Kumar had been roped in to feature in the Rajinikanth starrer Robot 2.0 made headlines. Later we informed you that Akshay would be seen playing a negative role in the film. Well now we came across this image of Akshay's look as the evil Dr. Richard in the film.

Akshay Kumar who is seen dressed in an all-black feathery costume with grey hair, red eyes and grey eyebrows plays the antagonist opposite Rajinikanth, who will reprise both his roles - of Vaseegaran and Chitti in the sequel.

Apparently, Akshay's character in the film is said to be of a scientist who turns into a crow. Talking about Akshay, the film's director S Shankar praised the actor on Twitter saying, "Happy to shoot with Akshay Kumar - Hard working, disciplined n cooperative actor."

Robot 2.0, also referred to as Enthiran 2, is a sequel to Rajinikanth's 2010 blockbuster Enthiran (Robot in Hindi) where the actor played a double role - the antagonist Chitti the robot and the hero, a scientist named Vaseegaran who created Chitti.