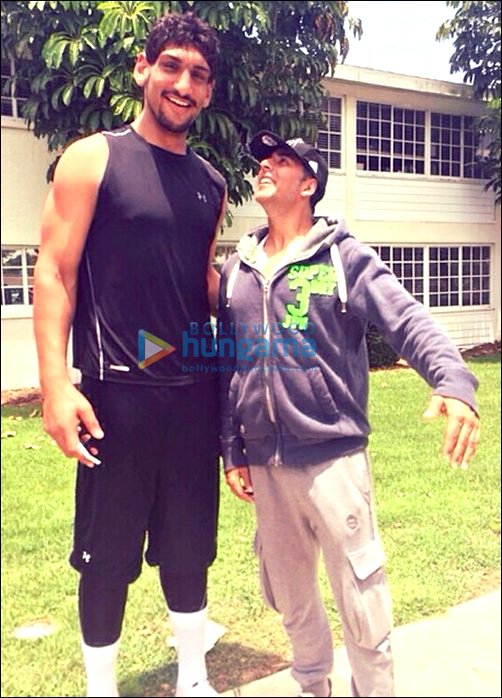 Akshay Kumar's love for sports is something that we all know of. The actor, who was recently in America holidaying with his family after the success of his recent release Holiday, met up with Indian basketball player Satnam Singh.


Posting a picture of himself with the sports star on instagram Akshay says, "Meet my new friend Satnam Singh! India's most influential Basketball player! He has a story that would melt ur hearts! I met him in America at my niece's summer camp where she's training to live her dream of being a brilliant Basketball player for India one day. Satnam is not only incredibly tall but unbelievably dedicated & talented at what he does here at the IMG Basketball school. What he's been through to get where he is, is an inspiration in itself. He reminded me of me, when nothing but ur dreams matter. I wish this lovely young man a super successful life & I urge many of you to follow him & learn from his story. I've been in America for nearly a month now, but when I leave, I'll be taking his hardship & training myself like a true champ for my next film, he's really given me the spirit to fight on... Anyways, hope you're all well, just wanted to share a piece of my Holiday with you. Love & Prayers, Akshay".


On the film front Akshay will next be seen in the comic caper Entertainment, with other three films Gabbar, Baby and the Shaukeen remake in the pipeline.