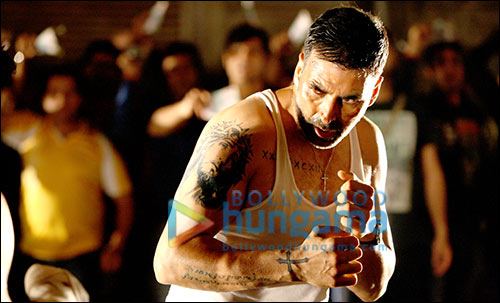 Akshay Kumar, for the first time, collaborates with Dharma Productions for the remake of the Hollywood blockbuster Warrior, titled Brothers. The recently released trailer of the film is garnering a great response and what is also gaining prominence is Akshay Kumar's avatar.


The superstar plays the role of David Fernandez in the film and is a professor who decides to step into the ring as a boxer to protect his wife and kid. This is also the first time ever where Akshay Kumar will be playing a Catholic. However, it was not easy to prepare for the role and the actor had to lose 17 kilos and even got inked for it. Talking about Akshay's character, director Karan Malhotra said, "Since Akshay is playing a Catholic character, my crew went to the bylanes of Bandra (Suburban Mumbai) and met people and saw the tattoos they had and also the way they speak."


In the film, Akshay has a Jesus tattoo on his arm and a cross on his wrist. Karan Malhotra further added that the actor plays a physics teacher with a hidden past. Brothers also stars Jacqueline Fernandez as Akshay's wife, Sidharth Malhotra as Akshay's brother, Jackie Shroff as Akshay and Sidharth's father. The film is slated to release on August 14.