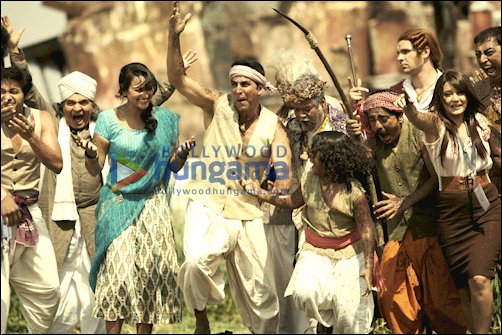 Here is presenting an exclusive still from Joker on which we have managed to lay our hands on. As can be seen, the still pretty much gives an impression of this being a fun film, what with Akshay Kumar and Sonakshi Sinha leading the bunch with a dance in mud.

Though the makers (Shirish Kunder, Farah Khan, UTV) are unwilling to share any details around the situation in the film that involves this mud dance, it is pretty obvious that the song setting is rural here with Minissha Lamba being the sole individual to have stepped in from a city (look out for her chic Western outfit). As for Sonakshi, she appears to be continuing her 'gaon ki gori' act from Dabangg, something that should keep her established fan base happy. With Shreyas Talpade seemingly in a fun world of his own, other characters like Sanjay Mishra, veteran Asrani and Vindoo Dara Singh are filling the frame as well.

What is surprising though is to see Akshay Kumar in an altogether different get up from what one has been seeing of him in films like (upcoming) Thank You, Tees Maar Khan, Housefull, Action Replayy or Khatta Meetha - his last few releases. Though he has played a villager in Singh Is Kinng, he was in Sikh attire there. However in Joker, he seems to have entered the interiors of the country and gone authentic with his villager act.

With all the talks of aliens, sci-fi, Alice In Wonderland fantasy world look and feel and now a rural setting, it could well be some intriguing offering from the makers here.