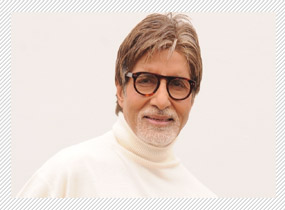 I have worked with Amitabh Bachchan in Sanjog. He is very passionate about his work. For him a 9 o'clock shift meant being ready on the set with make up. He never tired of rehearsals no matter how many times his co-actors wanted them. He has been a dutiful son and had taken care of his ailing parents. It's because of their blessings that he has reached the position he is in today- Mala Sinha

I was shooting in Gurgaon for Aurangzeb, bit look permission to fly down to Mumbai to celebrate Amitabh Bachchan's birthday. We share a special relationship, as his daughter is married to my nephew and professionally we have done five films together. Now I am looking forward to working with him in Mehrunissa after 20 years. Amitabhji loved to play pranks and we shared an unspoken bond and knew exactly what the other was thinking. He has inculcated discipline into the industry. Before him actors, and that includes me, were not so particular about punctuality. I want to thank him for his immense contribution to the film industry - Rishi Kapoor

I am truly blessed to be the contemporary of the nation's icon. Amitabh Bachchan is an extremely intelligent and good - hearted person. He redefined acting and brought respectability to the fraternity. He is, as they say in Sanskrit, Aditviya meaning no one comes close to him. My first film with him was Kasauti. The producer of the film had asked me whether I was willing to work with a new boy and I agreed. At that point, I saw a rare quality in him and knew he would go on to become very successful. We have acted in several films and after a long break I was offered Baghban. I am happy for him and I wish that he continues to flourish - Hema Malini

I have done several films with Amitji and I have fond memories of working with him. For me it was a great honor that I got an opportunity to work with him. I grew up watching him films, and then to observe him shooting in real life was a thrilling experience. He is one of the most disciplined personalities in the industry. He is the guiding force to scores of youngsters who can learn a lot from his dedication and discipline a true legend - Akshay Kumar

Our first film together was Gehri Chaal. Amitji may appear to be a serious person but he can be real fun on the sets. While shooting for Ganga Ki Saugandh in Hrishikesh, we would go for long drives after pack up, and have dinner in Dehrahun and dance till two in the morning. He loved to listen to music and had several CDs in his car. In Mumbai we would regularly meet at Kalyanji-Anandji's place and there would be a lot of gaana bajana. Not many could understand his sense of humor, which were generally one liners said with a straight face. He was a vegetarian and would often get pea parathas in his lunch box. Amitji is quite obsessed with cleanliness. I love his perfect dialogue delivery, be it in Hindi, Urdu or English -Bindu

Amitabh Bachchan and I started our careers tighter with Saat Hindustani and went on to work in several films. I remember we were shooting for Pyar Ki Kahani and a song was being picturised on Anil Dhawan and me. I noticed that Amitji who was present on the set was also dancing behind the camera, without missing a single beat! I felt honoured that Gulzarsaad and I were amongst the very few people invited to his marriage which was solemnized in a flat! More recently, I worked with him in Kabhi Khushi Kabhi Gham and he would call me buddhi! He a very mischievous person and always teases his co-stars with a poker-straight face. When I saw Paa I was stunned by his performance. I love him immensely, and wish him many more birthdays! - Farida Jalal

Amitabh Bachchan remains the same down-to-earth and gracious person that he was forty years ago when I worked with him in Bombay To Goa. He still retains his humility which was understandable at that time but the position he is in today is credible. On the first day of shooting the song Dekha na hai re socha na rai re, Mehmood who was directing the film called for a pack up at lunch time because Amitji just couldn't get his steps right. Unko dance bilkul nahi ata tha. He was very nerves and sheepish the next say but had improved considerably. He is very helpful and has helped almost everyone he has worked with. I wish him good health and a long life - Aruna Irani

I cannot believe that he is 70 years old, the number just doesn't suit his vivacious personality. I have worked in only two films, and was in awe of him. While shooting for Bhoothnath I would observe him while he performed with the child stat Aman Siddiqui. He gave his 100 per cent to very shot, and that's the time I realized that it was this ability which sets him apart from the rest. During his free time, Amitji would eagerly want play video games and between shots the three of us, he, Shahrikh Khan (who was also on the film) and I would play games on the computer! - Juhi Chawla

I am an ardent Amitabh Bachchan fan, and have watched his films so many times that I know them backwards. It was when I directed him in Kaante, I realized the reason behind his aura. I remember at that time he was undergoing dental treatment for two root canals and was in immense pain, but he never asked for a single say off. He would come for his shoot at five in the morning and shoot till nine. He would then go for his treatment and be back by 11am and then again go to the dentist after pack up. He is a dream to work with, and I hope to work with him in the future - Sanjay Gupta