Amid the busy schedule and promotions of their record-breaking single 'Dynamite', BTS member V, birth name Kim Taehyung, took some time off of his work schedule to meet up with music legend PSY. 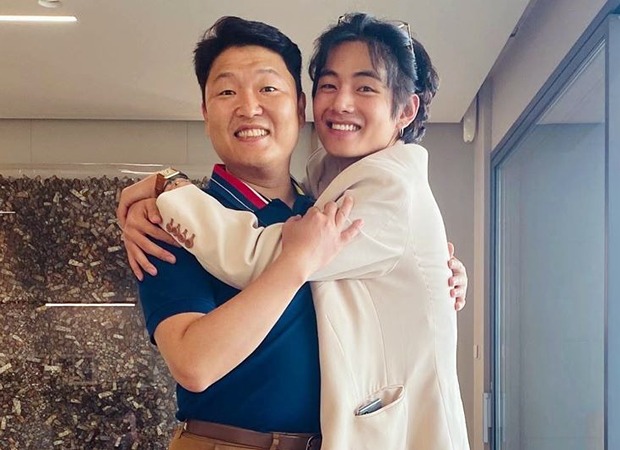 On Monday morning, September 21, Park Jae-sang, known professionally as PSY, shared two pictures on Instagram in which he and V were seen hugging each other. The musician captioned the picture, "me & V" and also added their birth dates 1230 and 1231 as V's birthday falls on December 30 and PSY's on December 31. It seems like they recently met up.

PSY wore a blue t-shirt and khaki trousers whereas V wore off-white Sies Marjan Cyrus single-breasted cotton-crepe blazer($1720) and trousers ($717). We wonder what this meet was for - a possible collaboration? We will have to wait and see!

This ain't the first time V has met PSY. Back in 2015, PSY won first place on South Korean music program Inkigayo for his track 'Daddy'. Many Korean artists were on stage to celebrate the win including BTS. In the popular video, V was standing next to PSY and even danced and crooned along.

Earlier this year, V released his solo OST track ‘Sweet Night’ for one of the most popular Korean actor Park Seo Joon’s show, Itaewon Class. The series is not only a critically acclaimed drama of 2020 but this OST went onto break every major record. The song surpassed PSY’s ‘Gangnam Style’ record by attainting No. 1s in 88 countries on iTunes worldwide. Back in 2012, PSY became the first Korean solo artist to ever top the iTunes chart. V broke the eight-year record with ‘Sweet Night’. As of now, V is the first Korean solo artist and only artist to have his song at No.1 in 117 countries on the iTunes chart.

Meanwhile, V is also working on his solo mixtape and has hinted some tracks on BTS' documentary Break The Silence and vacation series In The Soop. During episode 5 of In The Soop, V shared a heartwarming conversation with J-Hope regarding the mixtape. "I'm making this because I want our fans to hear it. I'm doing this because I want to share the music that I've been working on and that I love, but I'm a bit worried that it'd look like I'm doing it to achieve something when that's completely not in my interest."

i really loved this part of vhope talking about taehyung’s mixtape and hobi giving him some advice pic.twitter.com/Bo7ie67eL6

Meanwhile, BTS is currently gearing up for the release of their next album which will drop in the next few years. Every member has contributed to their album, taken up different aspects of the work in the process. Their recent English single 'Dynamite' has achieved No. 1 on Billboard Hot 100 chart for two consecutive weeks.

Recently, the septet reached the Blue House in South Korea on September 19 in order to attend the National Youth Day in presence of President Moon Jae-in and first lady Kim Jung Sook. During the first Youth Day, the seven members of BTS were addressed as the "youth leaders". Their speeches were eloquent as they truly reflected on their journey.