Following their reign on Billboard Hot 100 chart week after week with their second English single ‘Butter’, South Korean juggernaut BTS is back with a remix that features the powerhouse rapper Megan Thee Stallion. After the announcement was made on August 25, the remix dropped today on August 27 taking the music world by storm. 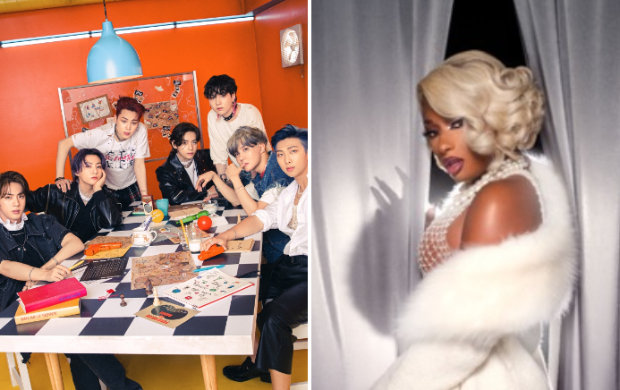 Whilst the original version brimming with bright energy put forth the distinctive personality of BTS, the latest version adds more flavor with the rap verses from Megan Thee Stallion. The sometimes smooth and at times charismatic duality of BTS infused with Megan Thee Stallion’s powerful vocal delivery, ad-libbing, and signature sound creates a unique soundscape for the listeners to enjoy.

The remix is accompanied by a newly stylized digital cover and a colorful visualizer that make the partnership between BTS and Megan Thee Stallion even more special. Megan begins the remix with “Ayy, it's the Hot Girl Coach and BTS, ah.”

Her fiery verse goes like, “Ayy, so smooth like the car I ride / Even ya best party planner couldn't catch this vibe / Big boss, and I make a hater stay on they job / And I be on these girls necks like the back of they bobs / Houston's finest, in the room with bosses / Make 'em all get ratchet in they suits and blouses / I remember writing flows in my room in college / Now I need global entry to the shows I'm rocking (Yeah) / Smooth like cocoa butter
My drip more than a puddle / They know that I'm the wave / Take over every summer / They must be giving Stevie if they ever had to Wonder / 'Cause every beat I get on, get turned into Hubba Bubba, ah.”

While the tempo remains upbeat just like the original track, the adlibs of Megan add a lot of flavour to it. She even adlibs with SUGA's verse “Got the right body and the right mind.” Overall, it's the remix that was highly awaited as it brings together the star power of BTS and Megan. The remix does justice to the original track but also adds a lot of Megan's style to it making it another anthem of the year. In the words of stan Twitter - HOT GIRL SUMMER HAS OFFICIALLY EXTENDED!

BTS prepared the remix to celebrate the massive response that ‘Butter’, dubbed as ‘song of summer,’ received all around the world. Megan Thee Stallion also showed excitement for this collaboration: “I love BTS so I’m super excited to be on the ‘Butter’ remix. I can’t wait for all the Hotties and ARMY to hear it.”

The remix follows on the heels of yet another stellar summer for BTS, with ‘Butter’ becoming the longest-reigning No.1 Billboard Hot 100 song of 2021 as it stayed at the summit for 9 weeks. In addition to that, the song broke countless records including the biggest music video premiere on YouTube of 108.2 million views in 24 hours and the most opening day streams in Spotify history with 20.9 million unfiltered global streams.