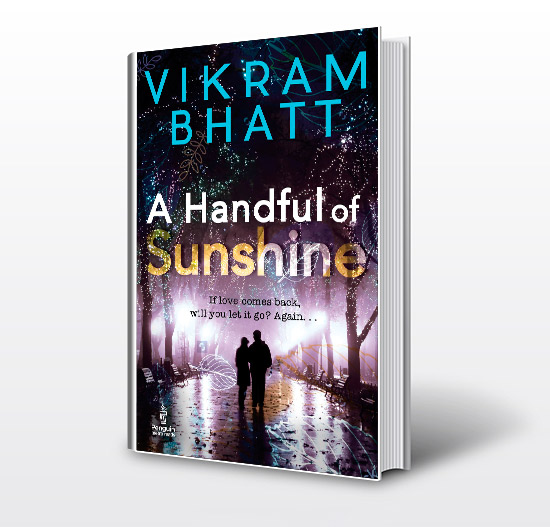 Aah, that sound of a roaring plane!

Now that appears at just three or four junctures in the 270 odd page romantic drama written by Vikram Bhatt. However when it does, it makes its presence felt, so much so that when it appears for the last time around, it indeed breaks your heart. Now that's the sound which the leading female protagonist Meera hears, courtesy the strategic location of her London house that is close to the airport. It escalates the emotions, it diverts them, it shuts them down, and basically does all that it wants to when you least expect it to happen.

The results are of course unexpected.

It is this unexpected journey that Meera and her love Veer go through in the 10 years that separate them from their first meeting to the one that turns out to be the decisive turning point of their lives. She is a daughter of an entrepreneur establishing an identity of her own, he is a budding copywriter who is made for bigger and better things. They meet, and are pretty destined to be together. However, rare is a happy ending in the lives of two hearts in love, and the story of Veer and Mira is no different. Fate separates them, but then also plays its game to bring them together. What was just 'a handful of sunshine' now has come back into their lives, only to promise a sunny lifetime ahead.

However, would it turn out to be the sunshine that lasts forever or they are destined to be star crossed lovers?

Filmmaker Vikram Bhatt, who has turned novelist with A Handful of Sunshine, displays an unexplored side of his as a storyteller where he brings to fore the love, pain and heartbreak experienced by the lovers who are meant to be together, only to suffer more pain when they come closest to being with each other. Though over the years he has made films that have been supernatural affairs or crime dramas, the sense of love, passion and betrayal has been inherent in most of his affairs. However with A Handful of Sunshine, he brings on his sensitive side and that is something that truly sets him and this work of his aside.

Of course given the fact that you have been exposed to Vikram's style of storytelling for close to 25 years now, it is relatively straightforward to visualise the scenes as he writes them. The turn in the story comes within the first five pages itself and you know that it is going to be a fast paced ride that he would take you along. The masterstroke that he plays though is that he sets a chapter each from Veer and Meera's point of view, something that explores the psyche of the same situation from the point of view of a man and a woman respectively.

This is something that truly works for the book, especially towards the Act Two where the drama turns tense and situation becomes unpredictable. As Veer, you expect a certain tone of the situation. On the other hand when Vikram holds you by hand and makes you enter Meera's world in the same situation, you see it all from a different point of view. That keeps the guessing game on for a major part of the affair, and by the time you step into the Act Three, you really pine for the duo to be together.

Now this is where the true win lies for Vikram as he manages to make you feel for the characters, and not just see them as words on the pages, something that makes you remember your own times gone by over your growing up years. Really, if you are someone who has moved into your 30s or are in the 40s then rest assured, there would be many a chapter, an anecdote or a scene on the printed words that would make you remember a part of your love life that you left behind. A life, where you fell in love for the first time, and then lost it!

No wonder, if you have ever been in love, lost it, and then found the same person again at some turn in your life, this book is a MUST read!

As Vikram rightly says at one crucial juncture of the book and a defining one at that - "The tragedy is not that we fail. The tragedy is that we almost make it..."!

After 1920 and Raaz, Vikram Bhatt announces…

“The support I’ve received from my…