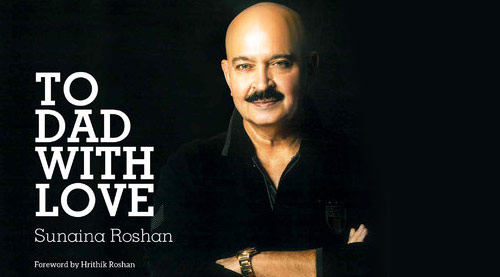 Now this one is a rare affair. While one usually finds a celebrity putting together an autobiography or a noted author being brought on board to do a biography, To Dad With Love is a rare book where the author is celebrity's daughter. SunainaRoshan, daughter of RakeshRoshan, lovingly puts together a 150 odd page coffee table book for one of the best and most successful filmmakers in the business. It is also quite apparent here that there is so much of love, affection, gratitude, respect and emotions coming into play that all on gets to read is an all-white account of the man who has had a remarkable journey so far.

Let me begin with the manner in which the book has been put together. Simple in its vocabulary and precise in its description, this is thankfully not a 500 page affair that goes on and on into the intricate details of the man in question, something that really gets tiring in many a biographies. As a matter of fact, this is not even a true blue biography as it is more about Sunaina expressing her love for her dad. Due to this, the book stays on to be crisp, yet informative - albeit a lot lopsided.

What really works most for To Dad With Love is the 'picture book' format that it carries. This means there are dozens of photographs put together in this classy affair where everyone who matters in Roshan family's personal and professional liaison finds a special mention. In fact there is a surprise in store on practically every page and as one flips around, there is something new that awaits the reader.

No wonder, there is a lot that one gets to read about Roshan's family's inner circle comprising of Rishi Kapoor and Jeetendra. On the other hand there is a detailed account of Shahrukh Khan going on record around the break that he got from RakeshRoshan for King Uncle and the association that has continued for over a couple of decades now.

However, the most heart wrenching story being told is about RakeshRoshan's rise from being a flop actor to an acclaimed filmmaker. Sunaina explains how so many in the industry vouched for him to be successful in the world of actor but somehow not much fell in place. This isn't all as his graduation to being a producer too wasn't without its glitches, due to which there were multiple occasions when the family was on the verge of going broke. Also, as the folklore is already known, Roshan family had bet its last shirt on Hrithik's launch with KahoNaa... PyaarHai.

While one indeed likes this story about rising from the ashes, what is conveniently missed though are the failures that RakeshRoshan suffered with his initial films as a director. Hence, flops like Kaala Bazaar and Karobaar find not more than a fleeting mention. On the other hand productions misses like Kites and Krazzy 4 are ignored as if they never happened at all. Agreed that the book was written by Sunaina as an ode to her father. However, just like RakeshRoshan's earlier failures as an actor were highlighted; it would have been interesting to know how he dealt with his production and directorial miss-hits during his successful phase.

Moreover, while it is understandable that a book from a family member can't be expected to go into some really nasty details. However, the way To Dad With Love is written, a reader is made to believe that the subject in question is almost perfect. This pretty much shows the kind of contrast that I have found in books that have been written by family members. While Om Puri's wife went into the graphic details that even led to their separation, RakeshRoshan's daughter has painted a feel good affair where everyone in their personal world goes with the cry of 'all is well'.

Having said that, at the end of the day this is the prerogative of an author and in that perspective, Sunaina wrote what she felt was suitable for the global audience to read and know about her dad. As a reader, it is about consuming what best is in the offering and in that aspect, it is the story of self-belief of RakeshRoshan as well as countless unseen pictures from their family collection (with Hrithik featuring in quite a few out there) which act as takeaways.