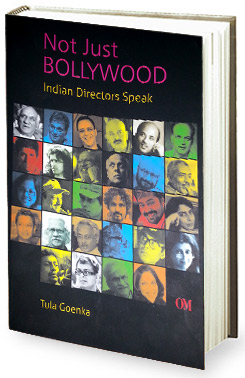 Books that cover interviews of multiple celebrities usually make for a very good read. Anupama Chopra did quite well with 'Freeze Frame' which was a compilation of 35 odd interviews. Though Bhawnaa Somaaya's 'Talking Cinema', which was on the same lines, didn't quite cover the distance, one just expected that Tula Goenka's 'Not Just Bollywood' would be better than that.

Unfortunately, that doesn't quite happen.

There was a good idea in hand though, which was for the author to indulge in some thought provoking discussion with filmmakers, both mainstream as well as offbeat, to discuss on matters that were not necessarily related to popular Hindi cinema. With a good mix of makers that ranged from Subhash Ghai, Rakesh Roshan, Vidhu Vinod Chopra, Ashutosh Gowariker and Sooraj Barjatya to Nagesh Kukunoor, Anurag Kashyap, Onir, Mrinal Sen, Jabbar Patel and Mira Nair amongst others, I believed that this 450 odd page would turn out to be an extremely engaging exercise.

Well, the book worked only in parts which were far and few. By and large, the conversations were dry and though the argument could well be that it wasn't mainstream popular cinema as a topic of conversation here, even otherwise 'Not Just Bollywood' was not quite engaging.

What irked most was the fact that many of these interviews were very old which means not only was the information outdated, it was also a tad weird to read about the making of films that were already released and knowing about stories that were no more in circulation. Of course, the author clarifies this in her first line during the book's introduction that these conversations were held over more than a decade gone by. Still, it is hardly a consolation as one expects fluidity in the narrative, and not the kind of jerks which one experiences while reading some outdated tales.

Moreover, it is also a little strange to find mentions of some of the filmmakers in this book who are hailed as being the crusaders of alternate cinema but in reality don't have much to demonstrate for that. Frankly, that just doesn't work and only made me wonder further how this book even came into being conceptualized.

In fact what further disappointed me was the fact that even those filmmakers, who usually make for an engaging read, didn't quite excite here. Now that's sacrilege, considering the fact that men like Mahesh Bhatt, Anurag Kashyap, Vidhu Vinod Chopra or Farhan Akhtar have seldom been unexciting. However, that happens here.

Tula Goenka segregates this book into popular, parallel and indie cinema and further goes on to a zone down further into South, West and East. This brings in filmmakers like Adoor Gopalakrishnan, Mrinal Sen, Goutam Ghose and others into the book as well.

Read it only if you would want to snoop into a conversation that the author had with them as this is the part where the idea of 'Not Just Bollywood' truly sinks in!