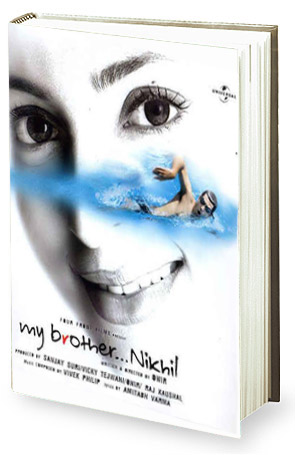 What grabs your attention the moment you lay your hands on the screenplay of My Brother Nikhil is the sleek book design. Quite handy and (thankfully) not at all weighty, it looks like one of those story books that you want to quickly start reading and wrap up in quick time. Also, there is a definite simplicity around the overall design and presentation that gives it a pleasant look and feel despite the serious subject.

Even though the book is arriving years after the film had hit the screens, its timing seems just apt as it hits the stands around the time when director Onir is ready with his I AM. Though he has made Bas Ek Pal and Sorry Bhai in the interim, it is I AM that seems closest to the kind of sensibilities that Onir comes with and hence makes one positive that yet again there would be something worthy to watch when the film releases in theatres.

Meanwhile coming back to My Brother Nikhil, it only ends up being a good revisit to the time when Onir had just started off and played his emotions to the fullest in order to pull off a film that would have seemed impossible on paper. There has never been a mainstream film on homosexuals and when My Brother Nikhil had released, it hadn't quite set the box office on fire either. However over a period of time it had gained a following amongst the niche audience who are catching the film on DVD. Moreover the film too continues to travel across continents in numerous film festivals.

Coming to the core content of the book, My Brother Nikhil screenplay clearly boasts of the simplest ever presentation that one has seen for a Bollywood focused book. There is no cluttering due to unnecessary information or over selling. Just like the film itself, the presentation too is basic, too the point and concise sans any show off business. To put it simply, it is easy on eyes and is extremely readable due to this very reason. Moreover, there are quite a few pictures included in the book (mostly in Black & White) and they end up accentuating the overall reading pleasure.

As for the written word in the screenplay, it is entirely in English but still quite easy for a Hindi moviegoer to comfortably relate to it. What impresses most is that the film has an enormous 150 odd scenes/shots but they are all written in such a concise manner that it doesn't take much time to move from one scene to another. Also, despite the subject of homosexuals and AIDS, there is no heavy duty 'bhaashanbaazi' or moral science lectures included into the screenplay. Moreover there is no conscious effort being made to create scenes in such a manner that they force a viewer to shed tears.

Yes, there is no denying the fact that the screenplay by itself has a very restricted audience for itself. First and foremost the very percentage of movie going audience who like to catch the film's dialogues in a book is very restricted. Add to that the fact that My Brother Nikhil wasn't written for a true blue Bollywood fan. This is not all as the very subject of homosexuals isn't something that would make many jump with joy and grab the book pronto.

However for those who fulfil the above three criteria, going through the book is an engaging exercise that makes you look forward to watch not just My Brother Nikhil but also I AM.

Tags : I Am, My Brother Nikhil, Onir

“It’s because of him where I am today,” says…