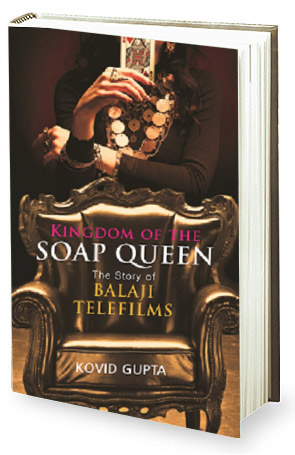 Now this could well be a first. Even though quite a few books are written on superstars, there are a few filmmakers too who have enticed authors to write about them. However, one hardly finds any book written on a television celebrity, especially when that individual happens to be someone 'behind the scenes'.

In that aspect, young first time author Kovid Gupta attempts something new by telling the tale of Ekta Kapoor, the young woman who revolutionized the world of television and is a hot-shot film producer today. While concentrating on her television life, Kovid - who is also the writer of TV shows such as Balika Vadhu, Bade Achche Lagte Hain and Chhan Chhan - sets his priorities and goes about interacting with dozens of people who have come together in making Balaji Telefilms where it is today.

Of course one thing that clearly stands out in this 200 odd page book is the fact that Kovid indeed loves his subject, Balaji. Nothing wrong in that as he still goes about stating facts. However, it is apparent that for majority of written word, it is the fan-boy in him talking which stays true from first till the last page of the book. Yes, somewhere down the line he also narrates a few episodes that could have gone better for Balaji. Still, for most part of it, he happens to find quite a few flattering words about the manner in which Balaji house came into existence and went on to be a superpower.

In the process, everything about the inception of the production house, the challenges it faced at the time when cable TV had just set its feet in the country, the lack of available channels, the demanding nature of providing software on a daily basis, accumulation of talent, administration hassles, ego massaging, financial issues, business plans going awry, constant rise towards success, occasional dips in momentum and the courage to fight back are detailed out.

With such a fascinating story in hand and support of almost entire staff and talent that had worked with Balaji, Kovid could have made the book an extremely engaging read. However, this is where one feels that the kind of fluidity and connect that one expected here leaves a little to be desired. The intent is correct, the material in hand being massive too, but the manner in which the episodes are narrated turn out to be tad copy book with the whole reading experience turning out to be essay-like.

Yes, there are a few anecdotes being narrated as well but then in the recent times, books that have been released on Naseeruddin Shah and Rajesh Khanna have turned out to be such engaging reads due to the manner of writing that they have almost become a benchmark. In that aspect, this book could have covered a much larger distance, had the narrative been more fluid.

Nevertheless, for those who are interesting in knowing the professional life of Ekta, especially when it comes to the world of television, and how Balaji has managed to grow from strength to strength, this book turns out to be good affair indeed that aims at inspiring a reader to dream big and work hard towards accomplishing all of that despite the odds.