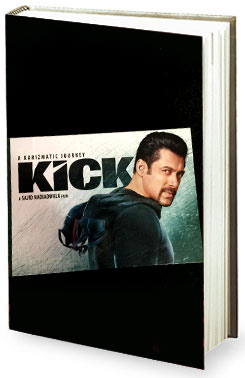 These are the two words that aptly define Coffee Table book Kick - A Karizmatic Journey that has been put together by Sajid Nadiadwala. If one has to call out the classiest coffee table book ever to have come out of the Indian film industry at the least, this one would take all the honors hands down. In my years of reading each and every book related to Bollywood that has ever been released, I have never come across anything like this.

Now this is what makes Kick - A Karizmatic Journey, well, charismatic indeed!

The film stood for its sheer scale, grandeur, class and overall treatment that was larger than life. Now the coffee table book is no different which is a 200 odd page affair with a poster size design to it. Printed on a thick glossy sheet, one experiences sheer opulence in this book where hundreds of exclusive pictures, stills and moments from the film are shared in an extremely neat and eye filling packaging.

Of course Sajid understands that Salman is at the center of affairs after all, and this is the reason why he hogs more than 80% space, hence making it a collector's edition indeed for his fans and followers. So one ends up catching Salman in all the fervor, what with several moments from his action, dramatic, musical, romantic and emotional scenes been captured. Whether it is the iconic sequence of him walking past by a train, the one in which he drove the red bus, the point where he got all romantic with Jacqueline to the ones where he had dramatic encounters with Randeep Hooda and Nawazuddin Siddiqui - it's all there.

What makes the book all the more special is the fact that practically every prominent cast and crew member gets his or her place under the sun while sharing experience and anecdotes around crew. While it is expected that the lead cast members and the producer, director, composer, lyricist and action director would feature in the film, it is remarkable to see those behind the scenes finding their due credit as well.

This means dedicated chapters are put together on how the now-famous mask was put together, the bike was designed as a fusion affair, the sets were erected in the most indigenous manner, the color combination was made picture perfect, the production design brought in the perfect grandeur, the costume design was taken care of with utmost perfection and last but not the least, the visual effects were as impeccable, as one can expect in a 'masala' blockbuster like Kick.

Meanwhile, there are some bonus elements in the form of several unreleased posters from the film, each of which is seemingly perfect enough to make it for the final marketing repertoire. All of this and more makes this book an affair that pretty much entices one to check out the film all over again. Even as tidbits and anecdotes shared by all involved make it for an interesting read, at the end of it all it is the visual quality of the book that makes it a collector's delight indeed, which is worthy enough to be preserved and flaunted in equal measures.

While as much effort has gone into putting together this book, one can't help but marvel at the manner in which Sajid Nadiadwala has brought all his resources together to come up with a film which stays on to be not just the only '200 crore club' debut by a director, but also the highest grosser ever of Salman Khan as well as year 2014.

Now if only there was an exclusive full-fledged interview of Salman Khan featured in the book as well, it could well have earned all the more brownie points.