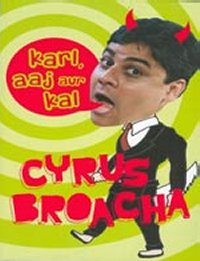 This is a book which is 'not' meant to be read in one go. Reason being that it is 230 pages of never ending jokes and the best way to enjoy jokes is to space them out. No, it isn't as if reading more than 20 pages of 'Karl, Aaj Aur Kal' is harmful by any means but then why not extend the humour to number of days rather than exhausting all the joy in 3 hours flat?

Did I say joy? That's right, joy, and this is what contemporary India's master of comedy, Cyrus Broacha, brings to immense measure in this tale of two youngsters who go by the name of Karl and Kunal. This time around he dons the hat of a story teller and brings in so much humour throughout his book that it is difficult to control laughter at any given point during the reading. A word of caution though - This is the kind of book which is enjoyed most if you are fond of Cyrus Broacha brand of humour. Which means that nothing and no one is spared, including Cyrus himself.

So what one gets to hear are jokes on opposite sex, age, race, nationality, profession, politics, art, Bollywood - well, just about anything and everything that one can think of. For those who are willing to catch the joke when thrown on him and still laugh at it, 'Karl, Aaj Aur Kal' is the one to be referred. The good part also is that even though quite a few (in fact most of them) jokes cross a certain limit, they do not sound offensive as long as taken in a right spirit. Also, majority of them are absolute originals that make one believe that cracking jokes comes inherent to Cyrus. Certainly, a gift indeed.

Coming to the content of 'Karl, Aaj Aur Kal', Cyrus gets cracking from the very beginning. Establishing his protagonists Karl and Kunal as the eternal losers, he comes up with a classic rags to riches story that had too less of a struggle and quite a lot of luck factor involved. So here we have two young boys who have an average growing up years of bunking classes, watching films, savouring food and enjoying pornography. It is this setting which takes Karl and Kunal from school to college and then dramatics. Soon they find themselves doing bit roles, only to graduate into B Grade heroes and later, with the blessings of a much senior actor Yusuf Khan, even lead roles. Wine, dine and women follow with Karl and Kunal turning into national celebrities. With a blossoming acting career, politics follows and no sooner had it all started seeming to be a dream, an opportunity of stepping into the shoes of a Prime Minister too beckons for one of the protagonists.

It is this basic plot on which Cyrus Broacha goes on to spin a momentous tale that is full of wit and relentless sarcasm. Dozens of reference points from the past and present are made, most of them (actually all) being fake and written about in order to get the right effect. The way Cyrus phrases his sentences also tells a lot about the person that he is, hence managing to bring his own self into the characters. Whether it is metaphors or real life references, Cyrus scores and though purists may argue that his sense of humour is crude, the fact remains that he consciously allows it that way and doesn't make two bones about it.

Which brings one to the question that what exactly is the target audience for 'Karl, Aaj Aur Kal'? Well, first and foremost it is the entire fan base that Cyrus enjoys. Turning over the pages of the book is akin to Cyrus talking himself and this is where the familiarity factor sets in. Secondly, the book should find popularity amongst the youth. Rest assured, don't try reading it in a public place lest you end up bursting out laughing at number of junctures. Believe me; it is embarrassing to say the least because I personally experienced that myself while reading it during my recent air trip.

This is a book to be read in private so that you can enjoy your 'bursting out laughing' moments the most. Really, 'Karl, Aaj Aur Kal' has ample funny moments that you can actually pick any page at the given moment and it would surely make you giggle away at the least.

FIRST LOOK: Angad Bedi to play the role of…