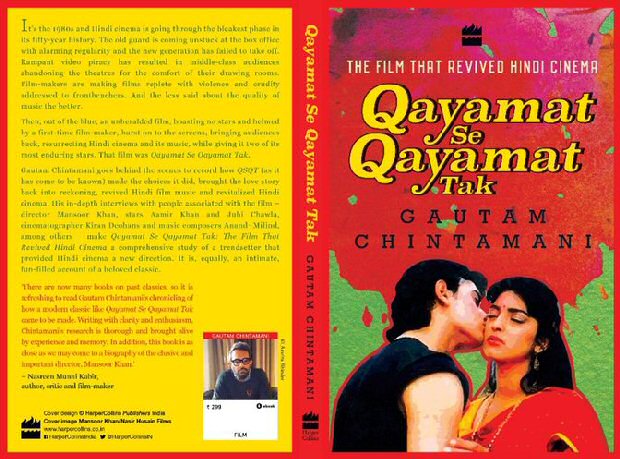 A couple of years ago, author Gautam Chintamani had come up with a fabulous book - The Loneliness of Being Rajesh Khanna - Dark Star. The book, in one word, was 'brilliant'. It had thrown open so many facets of Rajesh Khanna's personal and professional life that it was tough to put it down. Hence, when I realized that the author had now come up with another book, this time around Qayamat Se Qayamat Tak, I really wanted to check out what he had to offer. Unlike many other classics from the past, the Mansoor Khan directed film hasn't been dissected to a great extent. Yes, it has been spoken about, but not analysed!

No wonder, this was one opportunity that I didn't want to let go. As an 11 year old school kid who was mesmerized by the music that played along the film and the tragic ending that sunk my heart even as a child, I vividly remember wondering who were these two new faces - Aamir Khan and Juhi Chawla. Well, it is these very facets i.e. a newcomer cast, music and the tragic ending that made Qayamat Se Qayamat Tak a film that turned out to be ultra-popular amongst one and all. This was also perhaps one of the first instances of a film earning an acronym for itself.

Short and sweet - this is not just the manner in which the film is remembered till date but also the way this 150 odd page book has been designed. The content on display is just appropriate; neither is it too less nor does it go into unnecessary details that would end up resulting in boredom. Instead, Gautam makes sure that the balance is rightly maintained.

That said, the beginning of the book is not really flattering. One would have liked to know about the legacy of QSQT with a bang. However, what actually transpires in pages to follow is the preamble that went decades before QSQT turned into a reality. There is some time spent on introducing Nasir Hussain and his work and while that would interest the historians, for a regular reader it would just have been more apt had it all started right away with son Mansoor Khan and his tale.

Nonetheless, once it does happen, there is good momentum that begins to build. After spending some time in establishing the reluctance of Mansoor Khan around picking the mantle for directing this as his first ever film, there is no looking back as you get to know about how the film went through its scripting stage, how its memorable music [Anand-Milind, Majrooh Sultanpuri, Udit Narayan, Alka Yagnik] was put together, how Aamir Khan experimented with his look before finalizing one, how Juhi Chawla was a straight choice as the leading lady and how there were never-ending debates around happy v/s tragic ending.

Not that one is entirely unaware of some of the anecdotes that are shared. Still, since there hasn't been an overdose of these episodes in last two and a half decades, it is always nice to hear everything that transpired in the making of this film which indeed revived Hindi cinema to an extent. Of course, there were Box Office hits being delivered during that time as well. As confessed by Gautam, there were actors like Anil Kapoor, Sunny Deol, Jackie Shroff, Govinda and Mithun Chakraborty who were ruling the roost while Amitabh Bachchan too was making a comeback with Shahenshah. Still, ‘musical romantic’ genre was missing in a big way.

This is where Aamir Khan and his Romeo & Juliet inspired tale fitted the bill and Mansoor Khan, albeit reluctant right till his first trial screening around what he had actually made, scored the highest. As is the case with any product that goes on to be a best seller, even QSQT didn't really have any 'classic' tag fitted against it en route release. However, as the film continued to play in theatres for weeks in success, there was added confidence amongst one and all that something extraordinary has been put together by Mansoor and his team. Gautam picks this aspect and more while detailing the making of the film.

Thankfully for him, Mansoor is available to talk about the film and also cinematographer Kiran Deohans who is the biggest contributor to the book. Aamir Khan and Juhi Chawla share a few tidbits as well which lends further authenticity to the whole affair.

Pick this one up for sheer nostalgia!