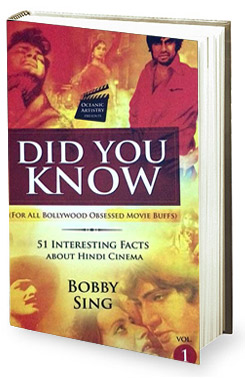 It is always a pleasure when someone tries doing something different in the world of Bollywood, especially when it comes to writing about it. While many an author have time and again gone into exploring history of Hindi films and have even gone ahead into exploring the socio-political-economical impacts, frankly a lot of that has become boring, tiring, monotonous and almost text book kind.

In that aspect, Bobby Sing's debut effort comes across as a whiff of fresh air. His offering to 'all Bollywood obsessed movie buffs' - as he calls them - uncovers 51 interesting facts about Hindi cinema. It always helps when someone is clear about what he/she wants to present to a reader and there is no pretence attached to it. This is where Bobby scores as he doesn't even attempt to give an intellectual account of how Hindi films have changed the world or how the world has impacted Bollywood. Instead, his eye is on sharing 'knowledge with entertainment' in Volume I of this 175 odd page book, and that's about it.

For starters, he keeps the written material really simple so that it is pretty much in reach of an average reader. Moreover, each and every fact (he refuses to term that as trivia though!) is presented with some good account of the film or the actor with which it is associated. At times, it may not have a direct relevance to the subject in question but one can clearly see the fan-boy in him getting all passionate while writing about it.

One doesn't mind that though as just the facts and figures could well have turned out to be a tad monotonous and also a very snappy read that may have risked coming across as a newspaper headline. The fact that he spends an average of three pages per fact while attempting to make it as interesting as possible showcases the endeavor he had about sharing his views too about how what had unfolded years and decades ago.

Now since this is a book about 51 interesting facts, it would be unfair to list them down explicitly here as that would spoil the fun of going through that in the book itself. However, to make the reader aware of what is in store, here is presenting a few pointers on what to expect:

- In the 80s, a comic series on Amitabh Bachchan was launched

- A film has already been made on Komagata Maru tragedy

- Jagjit Singh has acted in a cameo for a film

A collector's delight, the book may feature some of the facts that are perhaps common knowledge. However, by and large, what one gets to read here is exclusive, especially when all of it is compiled at a single place; and that too in an interesting manner. As an author, Bobby has done in not just coming up with an interesting book but also utilized social media for marketing and promoting it. That by itself has worked in the book's favor already, considering the manner in which it is already finding visibility amongst Bollywood buffs.

Pick this one up!