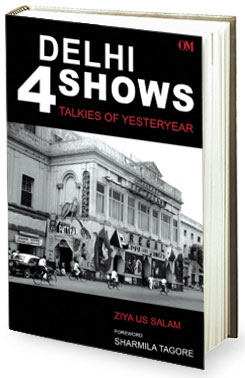 I was excited, very excited, when I laid my hands on the book Delhi 4 Shows - Talkies of Yesteryear. After all, I was made aware of the book by a film aficionado cum journalist friend (Bobby Sing) on the social media. As a fellow Delhite, he was super charged about the possibilities that the book offered and that suitably enticed me too in catching hold of this Ziya Us Salam effort. After all, the core theme of exploring the forgotten single screen theaters in Delhi was something that I could not even dare to ignore. With a couple of decades of my life spent in these theaters, it was always going to be a memorable outing.

As it turned out though, I was left with mixed feelings after going through 275 odd pages. Here is why.

To give credit where it is due, hats off to Ziya Us Salam to first of all identify a wonderful topic for his book. Such is the forgotten and down trodden state of affairs for the single screen theaters in Delhi that hardly anyone visits them now, leave aside discuss or talk about them. Still, the author felt that these theaters deserved one final good bye at the least. Now that's an appreciation worthy gesture indeed.

Secondly, the kind of research that has gone into putting together this book is mighty indeed. It is by no means an easy feat to make the round of 80 theaters, many of them defunct, to know about their origin, struggles, success stories, failures and ultimate state of oblivion that majority of them are finding themselves in today. In the times of internet, there is hardly any information available about most of these theaters which means the author had to build his personal connect with the owners from past and present and dog out detail. Now that must have been challenging indeed.

Thirdly, Ziya Us Salam gives his all in trying to make this informative as well as entertaining. He talks to people involved, mentions ticket rates that ranged from a few annas to a princely sum of ten rupees, shares anecdotes right in words of the chai-wallahs and the rickshaw pullers and goes deep into the barrel to see if there is anything right there at the bottom that could be picked, refined and then presented to the reader. Just for this effort, he needs to be given a round of applause.

However, where the book falters is at three places. First and foremost, it becomes very repetitive, predictable and even boring after half of it is through. After all, the struggle, rise and fall of almost every theater is just the same. If 50s, 60s and 70s is rightfully detailed as the golden period for most theaters, it is a known fact that with dwindling quality of films in the 80s, theaters had faced tough times. Later with the advent of multiplexes, these theaters couldn't withstand competition and started folding up. Now while it sounds educational to begin with, there is hardly any excitement in reading about it again and again.

Secondly, its very presentation is pretty dull as a result of which all the sad stories further start seeming disturbing theater after theater. Ideally, a book of this importance could well have been a Coffee Table pictorial affair. With more of pictures and less of content on display, Delhi 4 Shows could then have turned out to be a collector's delight. Instead, it turns out to be so text heavy that due to reasons as stated above, there is not much to explore in pages to come. So much so that I literally found myself flipping the pages vigorously towards the end.

Thirdly, while quite a few anecdotes and film references are exciting to go through, there are some glaring misses that are hard to ignore. Even if one leaves aside some wrong years of release that have been mentioned against a few films, one wonders how the author could miss out many significant references.

Like for example, Shiela had prided itself in hosting the dubbed version of Jurassic Park, Odeon had seen Karan Arjun go house-full for weeks at stretch, Sangam was one of the few theaters where Andaz Apna Apna ran to capacity during the morning and afternoon shows when University students came calling, Amba - despite its placement as a family theater, ran Aastha in prime shows, Rivoli - the pride of Connaught Place - had turned a hub for soft porn films many years in a row, Delite was a host to Kaho Naa... Pyaar Hai, Liberty had seen Dabangg create magic like never before, Chanakya and Priya - other than releasing prestigious films week after week - were a regular for Hollywood films which specialized in adult scenes (Basic Instinct and Disclosure made an appearance after every few months), PVR Saket was one of the only theaters to screen Chota Chetan in 3D when it was revived with the Urmila Matondkar version. Somehow, none of these factoids finds a mention in the book.

For a film lover like me, there is a lot more nostalgia attached to these Talkies of Yesteryear than the sad stories associated with them today. The fact remains that hardly a few had a foresight to take up the challenge of multiplexes and an early step in the right direction could well have helped them survive better. While this too may invite quite a few discussions and debates, a shorter, crisp, better laid out and more anecdotal account could well have made Delhi 4 Shows a must-have book.