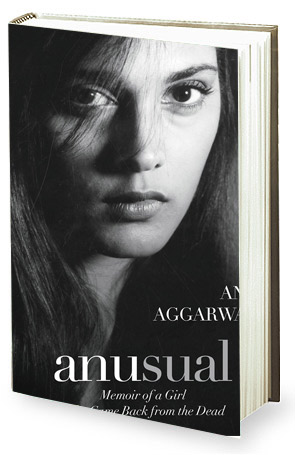 Anusual - I really had good expectations from the book. After all, the Aashiqui girl Anu Aggarwal is remembered till date, even though quarter of a century has passed by ever since she was seen in the Mahesh Bhatt's musical romantic affair. Moreover, call it a lucky coincidence but her song 'Dheere Dheere' has just been unveiled as well with Sonam Kapoor reprising her part in a brand new music video. That has only added on to the recollection factor and set the stage beautifully for Anusual which is tagged as 'Memoir of a Girl Who Came Back from the Dead'.

Well, those who came in late, many years back Anu had met with an accident that resulted in a broken body and a 29 day coma period. Still, the girl who had embraced yoga by then, managed to not just survive but also rebuild her life. Since this story of hers has largely gone unnoticed, I was excited to know what Anu has to say in this 180 odd page book that promised to be not just informative but also inspirational.

As it turns out though, it turns out to be a largely boring read that makes you lose interest much before even half way point is reached!

Now that's a sacrilege since an attempt like this is very rare when a celebrity is willing to bare her heart about some of the major incidents in her life. However, call it abstract writing or sheer lack of hold that the story has for a reader that you just can't bring yourself on the same page as Anu, hence resulting in Anusual turn out to be a passe affair.

For starters, the book basically narrates two points in Anu's life - one, when she is in the yogashram (which constitutes a major part of the book) and then later when she is recovering after the accident. This means those who wished to know about her rendezvous with Bollywood would have to look elsewhere as a mere glance is thrown on Aashiqui while her other films (Ghazab Tamasha, King Uncle, Khalnayika, Return of Jewel Thief) are completely ignored. Agreed that the intent here was not to put together a biography but at least a mention of these films and her decision henceforth to step into Yoga would have perhaps worked.

One could even let go off that had her elaborate experience at yogashram been interesting. Sadly, even that doesn't help as the anecdotes, incidents and happenings narrated inside the ashram just don't do anything to you as a viewer. As a matter of fact, you are hardly excited about knowing what really transpired in that space as the book just turns out to be thoughts spun together that may have seemed cohesive for Anu but turn out to be totally random for a reader.

Later, in the latter part of the book when Anu talks about her life and times post the accident, she does manage to hold your attention at least intermittently. She does well not to make it a sob story and for that she needs to be given due credit as there is no attempt to bring in sympathies. However, in the process there is nothing inspirational either as yet again it is back to stray thoughts featuring one after one another that is more of Anu's monologue than a conversation with a reader.

This is what turns out to be the biggest issue with the narrative here. Despite a strong subject in hand, it doesn't turn out to be engaging. Perhaps better writing may have helped.