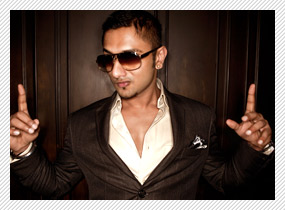 Over the last couple of days, there has been a lot of furore over rapper Yo Yo Honey Singh's songs featuring controversial lyrics with various sections of the society calling for a ban on the singer given the sensitive scenario post the gruesome Delhi rape incident.

However, it must be noted that Bollywood songs itself have had double-meaning lyrics since a long time now so why blame just one particular singer? If one takes a trip down memory lane, the 90s really took the cake when it came to songs with controversial / double-meaning lyrics. After all who can forget songs like 'Choli Ke Peeche Kya Hai' (Khalnayak), 'Meri Pant Bhi Sexy' (Dulara), 'Sarkailyo Khatiya' (Raja Babu), 'Rukmani Rukmani' (Roja), 'Sexy Sexy Mujhe Log Bole' (Khuddar), 'Main Maal Gaadi Tu Dhakka Laga' (Andaz), 'Khada Hai Khada Hai' (Andaz), 'Gutar Gutar' (Dalaal) and many more. Most of us did enjoy singing these songs during our school / college days and they went on to become cult classics. The songs even featured popular mainstream actors like Govinda, Karisma Kapoor, Madhuri Dixit, Juhi Chawla and Anil Kapoor and not some B- grade or C-grade actors. Some of them had to undergo change of lyrics like 'Sexy Sexy Mujhe Log Bole' became 'Baby Baby Mujhe Log Bole' after some protests by activist groups.

As we moved into the new millennium, the trend of coming up with songs featuring double-meaning lyrics continued. Songs like 'I Wanna Make Love To You' (Aitraaz) did raise a few eyebrows. With item numbers being the flavour of the season, you had songs like 'Halkat Jawani' (Heroine),' Chikni Chameli' (Agneepath), 'Sheila Ki Jawani' (Tees Maar Khan), 'Munni Badnaam Hui' (Dabangg) and 'Jalebi Bai' (Double Dhamaal) which continued with quirky, naughty and at times controversial lyrics. Again noted B-town actresses like Kareena Kapoor, Katrina Kaif, Malaika Arora Khan etc., didn't mind shaking their booty to these songs. The adult comedy Delhi Belly too had its share of such quirky songs most notable being 'Bhaag D.K.Bose ' which did receive some flak for its outrageous lyrics yet went on to be a chartbuster. The year gone by 2012 has too seen songs like 'I Am A Hunter' (Gangs of Wasseypur), 'Teri Shirt Da Button' (Kyaa Super Kool Hain Hum) and 'I Want Fakht You' (Joker) which was later changed to 'I Want Just You'. Even a song like 'Aa Re Pritam Pyare' from Akshay Kumar- Sonakshi Sinha starrer Rowdy Rathore had lyrics like 'Pallu ke neeche chhupa ke rakha hai, utha dun toh hungama ho' while Dabanng 2's 'Fevicol Se' had lyrics like 'Main Toh Tandoori Murgi Hoon Yaar, Gatkale Saiyaan Alcohol Se'.

Given Bollywood songs' obsession with controversial lyrics, is it fair to target just one singer? Do you think with this recent furore over Honey Singh, Bollywood will be careful in coming out with songs with such lyrics and more importantly do you think such lyrics are actually detrimental to the interest of the society in the long run? Do share your opinion on this in the comments section below...

Tags : Yo Yo Honey Singh