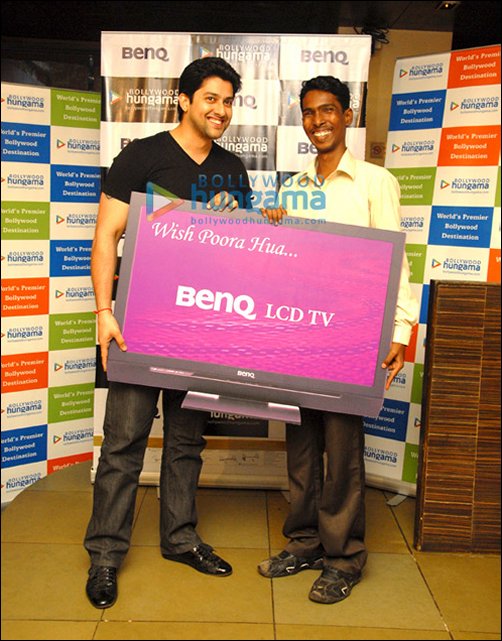 Aftab Shivdasani's latest film and his first as a producer Aao Wish Karein is a fairy tale about making wishes and believing in them. In keeping with the theme of the film, Bollywood

Hungama in association with Mumbai Mantra and BenQ had run the Aao Wish Karein contest in which lucky winners got a chance to meet-n-greet Aftab and one lucky winner was even eligible to win a 37'' LCD T.V. from BenQ

While the contest winners had a memorable time interacting with Aftab, it was indeed a once-in-a-lifetime experience for young Krishna Yelappa who won the bumper prize of the 37'' LCD T.V. from BenQ. As Aftab removed a random chit from the bowl containing the names of the contest winners, the excitement in the room was phenomenal. Aftab even played around a bit when he read out the name from the chit as A-F-T-A-B much to the audiences' delight. However, when he actually announced the lucky winner's name it was Krishna Yelappa who in the room.

An S.Y.B.Com student from Matunga, Mumbai, never in his wildest dreams had Krishna imagined that he would be winning an 37'' LCD TV by taking part in an online contest. Speaking to us after winning his prized possession Krishna said, ''I can't really thank Bollywood Hungama enough for this exciting contest. I am a regular surfer of the site and had participated once in a contest before on the site when I won an Audio CD. However, to win a 37'' BenQ LCD TV is something which I had not imagined. I am thrilled beyond imagination''

In the past, Bollywood Hungama has always provided its surfers the opportunity to take part in exciting contests. In the days to come, there will be many more such interesting contests, all you need to do is keep taking part and 'Wishing' that you get lucky.