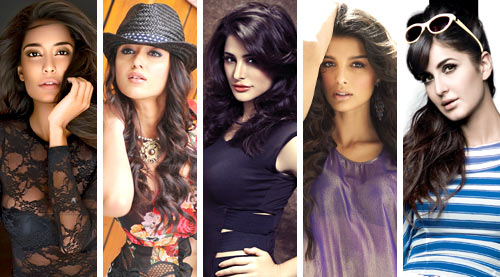 When Hema Malini and Sridevi came from the South to Bollywood, clueless about the stree-ling and pul-ling of the Hindi language, they worked on their Hindi to become no.1. Katrina Kaif got there without making an effort to master the language. That's a bit like batting for India without knowing how to hold the bat...Or doing an item song without knowing how to wriggle and pout. But Katrina has managed it. She isn't alone. Here's looking at other shuddh-angrezi memsahibs of Bollywood.


1.  Lisa Haydon: On Kapil Sharma's show Lisa Haydon spent all her time nudging Anupam Kher asking him what everyone was saying. Next time, try learning some Hindi before you come on the show. You are a Hindi film actress, right Lisa? In her turn-around film Queen, she played a desi girl settled in Paris and got away with her tuti-phuti boli. Again in The Shaukeens she plays a girl of Indian origin and therefore allowed to speak broken Hindi. But how long will she get roles that camouflage her conversational handicap? Get a Hindi tutor. Fast.


2.  Ileana DCruz: At least this lissom lass is trying. Ileana admits her Hindi is ....umm... theek nahin. Having a firang boyfriend doesn't help the cause of the rashtra-bhasha at all. But poor girl, she's trying. To be full-on ekdum-jhakaas Hindi phillum heroine, Ileana needs to THINK in Hindi. That's not happening in the near-future. But again to her credit, Ileana dubs her own lines.

3.  Nargis Fakhri: When it comes to speaking the language of Bollywood cinema, the very beautiful Nargis Fakhri throws in the towel. Not that she isn't trying! Nargis has hired staffs who are purely desi. But woe of woes, even her maid insists on speaking to her in angrezi! Nargis admits her complete unfamiliarity with Hindi largely ruined her performance in Imtiaz Ali's Rockstar. Candidly, Nargis admitted those lengthy lines of dialogues were to her like Chinese or any other language she didn't know anything about.

4.  Giselli Monteiro: Nargis has company. She isn't the only beauty Imtiaz Ali imported arbitrarily into Bollywood. Before Nargis, the Brazilian Giselli was seen playing a Punjabi kudi in Imtiaz's Love Aaj Kal. Giselle couldn't speak or follow a single word of the language that she was supposed to be acting in. Can we imagine an actress in French or Chinese cinema who can't speak the language? We are a liberal nation.

5.  Katrina Kaif: Arguably today's no.1 actress with only Deepika Padukone as competition Katrina Kaif mugs up her lines and doesn't know what most of those mean. For a very long time, her dialogues were dubbed by a professional dubbing artiste. Now she speaks her lines. Maybe one day she will be able to tell her children her ajab prem ki ghazab kahaani in Hindi.


Contrary to the way the firangi actresses are allowed to take linguistic liberties, a Freido Pinto had to master the American accent to get mainstream roles in Hollywood.


Writer Javed Akhtar explains why we don't mind Bollywood leading ladies who can't speak Hindi. "Hum British hukumaat ke sachche ghulam hai. A French, Japanese or German man speaks English in his own way. But an Indian man cannot mispronounce one English word, as he will be ridiculed. But it is perfectly fine to mispronounce Hindi or Urdu words. It's okay if a foreigner can't speak Hindi. But if an Indian can't speak English he's considered down-market," says Akhtar.