In the recent episode of Bigg Boss 15, contestant Afsana Khan was asked to leave the house. Her eviction comes after she picked up a knife and seemingly threatened to harm herself with it. 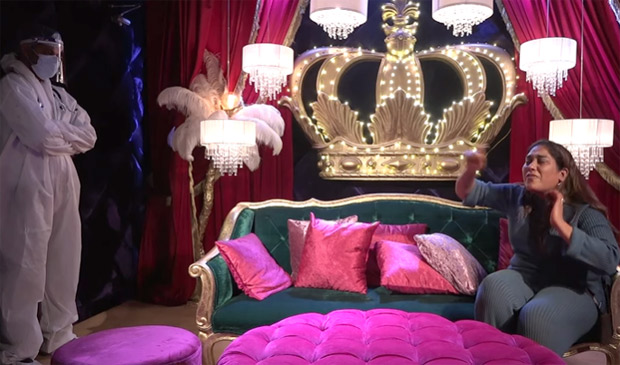 Afsana's fight started with Rajiv Adatia during the task to get into the VIP race to the finale. Firstly, she threatens Rajiv that she would lift her shirt up if he came close to her. Jay Bhanushali and Pratik Sehajpal try to calm her down but she did not listen to anyone.

Afsana said that Shamita Shetty has turned Rajiv against her and called her (Shamita) fake and 'mental'. Shamita said that Afsana has gone "mental" and has 'lost the plot'. Afsana shouted at her, “Aapmujhe mental nahibolsakti (You can't call me mental)." Afsana threw a chair, water bottle and threatened to harm herself. She shouted, “Mein marrjaungiyahanaaj (I will die here today)." Then she picked up a knife, which Umar Riaz tried to take away from her but she grabbed it again.

After the incident, Bigg Boss called Afsana inside the confession room and provided her with a doctor for her anxiety. He announced that Afsana has to leave the show for threatening to harm herself and others in the house. As Afsana refused to leave the house, Bigg Boss sent crew members to bring her out. Afsana kept refusing to go out by saying, “Nahi mAin nahi ja sakti yeh muh le keapna. Mere gharmein 10 log hain mein yahan unki bezzati karwane nahi aayi hun. Mein Shamitake bhai (Rajiv) ko le kejaungi" (I cannot go from here like this. I have 10 people at home, I cannot dishonour them like this. If I will go, I will take Rajiv also.)

After this, Bigg Boss fans are now slamming Shamita Shetty for provoking Afsana.