Salman Khan just wrapped up with his game reality show Dus Ka Dum. While the changed format of the show only featured Bollywood celebrities as guests, the finale too has been completed. Now, the superstar has kicked off his next reality show on the cards – Bigg Boss 12. The popular show that has started featuring the common public for the past couple of seasons, will now have a different format and Salman will explain the same in the promo which has shot recently. 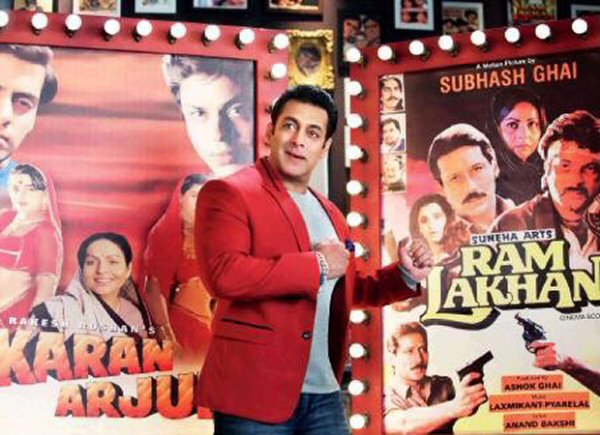 This picture of Salman Khan posing against the backdrop of Bollywood films like Ram Lakhan and his own film with Shah Rukh Khan, Karan Arjun has gone viral on social media. The said image is a part of the first promo of Bigg Boss 12. And the reason why there are posters of two hero films is because of the latest format on Bigg Boss. The new season is said to feature jodis, as in vichitra [unique] ones.

Generally the word jodis is associated with lovers or husband-wife. However, in case of Bigg Boss 12, the jodis can be anyone but the entry will be done by a contestant along with his/her partner who can also be a relative or your boss. As per recent reports, ‘vichitra jodis’ may include anyone between saas-bahu [mother-in-law – daughter-in-law], boss and employee, mama – bhanja [uncle – nephew] etc.

For the latest promo, Salman Khan has donned varied avatars for the different promos of Bigg Boss. There will be as many as four that will be released before the show goes on air next month. While we have already got a glimpse of one of the promos where Salman Khan is playing himself, reports have it that the actor will feature in avatars like government employee, teacher, village sutradhar amongst others.

Bigg Boss 12 is expected to go on air on September 16.