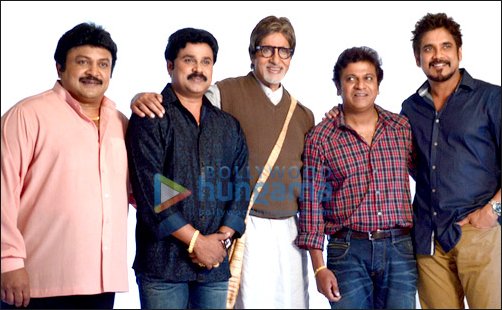 Even though there have been many ads that Amitabh Bachchan has shot for, the one that he shot lately is something that is truly memorable. The reason?

Well, his co-stars in this ad were all the mighty names from the south, viz., Prabhu, Nagarjuna, Shivraj Kumar and Dilip.

Showering praises about the ad shoot and his co-stars, Big B tweeted about it saying, â€œSimply amazing!! Prabhu from TamilCinema, Nagarjun from Telugu Andhra, Shiva from

Karnataka and Dilip from Kerala... SAH!! Facing all the biggies of the Southern Film Industry in one sequence of my shoot - an unprecedented honor!!"

He also blogged about the shooting experience stating, "I have had the great honor and pleasure to have worked today with some of the popular and distinguished stars of the

Southern region of our country â€“ TamilNadu, AndhraPradesh, Karnataka and Kerala â€“ who have been not just colleagues of our vast film industry, but have through the years been

close friends. Today there was Prabhu, celebrated son of the eternally great Shivaji Ganesan, a legend and a colossus, from the Tamil Film Industry, Nagarjun from the Telugu

Cinema in Andhra, a super star and the son of the legendary thespian Nageswara Rao Akkineni, Shiva from the Karnataka Film Industry, son of a dear friend and well wisher, the

legendary Raaj Kumar, worshipped and adored by the fans and the people of his State, and from the Malayalam Film Industry in Kerala, Dilip, a star who is creating waves in his

homeland." He also added that, "I have also never shied away from the fact that the South Film Industry is greatly more talented with fresh and innovative ideas and creative thought

than their counterparts in the North."