Readers may be aware that Kartik Aaryan is extensively promoting his forthcoming film Bhool Bhulaiyaa 2. The actor has been hopping cities for the same and he also visited Dubai to promote the film. Not only did he interact with fans during this visit but he also danced to the tunes of the title track of the film. 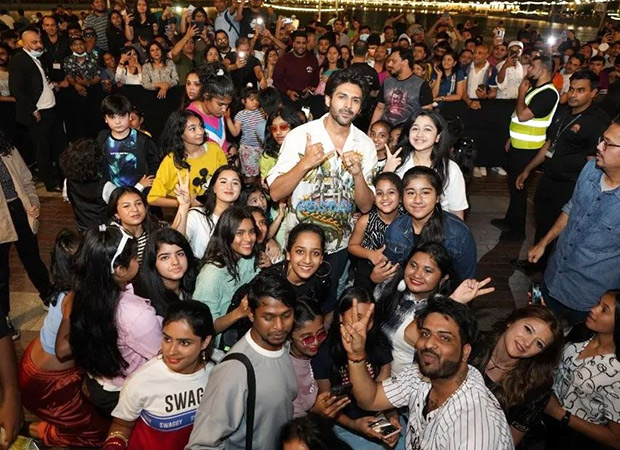 In a series of photos from Dubai, we can see that Kartik Aaryan humbly interacted and even clicked photos with fans during the Bhool Bhulaiyaa 2 promotions in Dubai. After launching the title track of the song in different cities, the actor is also said to have gathered the crowd and danced to the tunes of the film’s title track at the popular fountain area in Dubai Mall. If reports are to be believed, there was complete fan frenzy at the Dubai Mall fountain location and they went crazy when the actor even completed the hook step of the track. Have a look at some of the photos from the Dubai promotions:

Bhool Bhulaiyaa 2 is a sequel to the 2007 horror comedy featuring Akshay Kumar, Vidya Balan, Shiny Ahuja, Ameesha Patel in pivotal roles. On the other hand, the new sequel features Kiara Advani, Tabu among others. While the characters are different, the film continues with the legend of the ghost ‘Manjulika’ in the 2022 starrer too. Directed by Anees Bazmee, the horror comedy is slated to release on May 20.