Last Updated 18.10.2021 | 9:40 PM IST
feedback language
follow us on
Bollywood Hungama » News » Bollywood Features News » Why Arnab Goswami and Kangana Ranaut must apologise to Rhea Chakraborty and use their ‘drama’ for the just causes rather than the manufactured ones

Four months after Sushant Singh Rajput's sad demise, the clouds of doubts are finally giving way to a more clearer sky. The AIIMS report and the CBI are on the same page in adjudging the death as a case of suicide. The Enforcement Directorate didn't find any financial wrong doing by anyone with regards to Sushant's bank accounts. The 'missing Rs. 15 crore' were never found as they were never paid by producer Vashu Bhagnani for a film to be directed by Rumi Jafferi. The Bombay High Court gave a bail to Rhea Chakraborty and the order absolved her of the serious charges imposed on her by NCB. It has been brought to light that thousands of fake accounts on social media were deliberately spreading misinformation about the case. 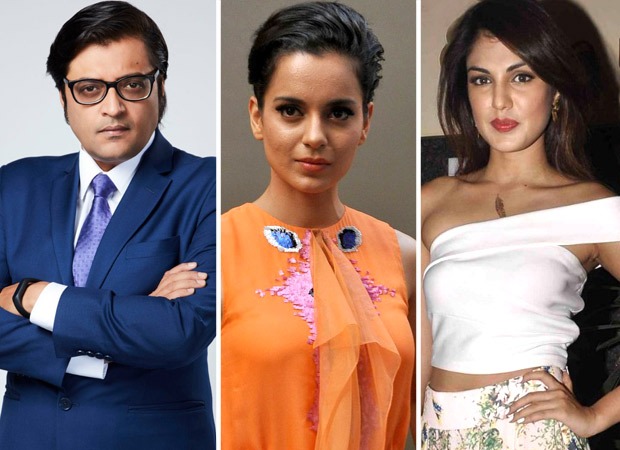 The fake TRPs scam has also unearthed the voluminous lust for advertising revenues that drove the 'agenda' for some news channels. Arnab Goswami of Republic has gone out of the way to vilify Rhea and several others but now he is being called out. Twitter outraged by trending #KanganaAwardWapasKar reminding Kangana Ranaut to return the Padma Shri that she promised to return if it is proven that Sushant wasn't murdered.

It is being said that even the abetment to suicide case will fall flat as there weren't any indications pointing at the same. Sushant had paid the salaries of his staff, mobile bill and the house rent before the eventual day of tragedy. He was an honourable man and it seems that he didn't want to cause hardships to anyone. He may have never realised that the person whom he loved the most and who stood by him in the bleakest phase of his life will be hounded in the most unimaginable manner.

As the evil and malicious intentions behind #JusticeForSSR campaign are unfolding, it is time for Kangana Ranaut and Arnab Goswami to apologise to Rhea Chakraborty for the inhuman trauma that they have caused to her and her family. Rhea's lawyer Satish Maneshinde told a news channel that she is a Bengali Tigress and that she shall teach a lesson to everyone that has ganged up against her. The legal route that Richa Chadha has taken against Payal Ghosh and the subsequent judgment in her favour proves that sometimes legal action is better than staying quiet. Many within the film industry need to learn from Richa. Will Rhea take the same step remains to be seen.

There is no doubt that Sushant's genuine fans (not the paid bots) were misled by the propaganda unleashed by Arnab and Kangana in particular and many other media houses/anchors. Sushant's ex-girlfriend Ankita Lokhande came in for criticism for endorsing patriarchy. She may have earned thousands of retweets, likes and views on the social media but she has badly damaged her brand that she cultivated over the years.

Let's accept this in clear terms that Sushant did suffer from mental health issues. The way the mental health issues were stigmatised by Arnab and Kangana has done a major harm to the cause of mental health issues in India. The term 'depression ka dhanda' used by Kangana while targeting Deepika Padukone will haunt her for many years to come. You may get eye balls, retweets, TRPs (question mark on its veracity) and views for making outrageous remarks but life is not a reality show. Let Bigg Boss trend on twitter. We know it is a game. Let it remain that ways.

Sushant habitually consumed drugs over a span of several years. There is no doubt about that. He was an adult who was too much of an individualistic person for anyone to force him into consuming drugs. Blaming others for his habits is not right. Yes drugs are not good for health and celebrities must resist such temptations especially since they are role models for many.

The manner in which the 'sponsored' trends tried to spread hatred for the film industry and film stars was in bad taste. Yes the film industry needs to get its act together and endorse talent over favouritism. Award shows need to stop being mere TV shows. Audience should support quality content over any biased propaganda. They shouldn't start hating a film just because they have been asked to do so on a Whatsapp or a Facebook group.

Finally, both Kangana Ranaut and Arnab Goswami need to understand once and for all that they need to stop taking the audience and the country for granted. They need to direct their creative energies in the right direction instead of being on the road to self-destruction. Reckless driving is best avoided. Both of them are talented. They should use their 'drama' for the just causes rather than the manufactured ones.