Two of the highest TRP rated shows, Anupamaa and Ghum Hai Kisikey Pyaar Mein came together for a new show on Star Plus. The channel has kicked off a new show called Ravivaar With Star Parivaar that features two Star Plus families pitted against each other in fun competitions as they try to outplay each other. It seems that recently Anupama and the Shahs shot with Sai, Virat, Pakhi and the rest of the Chavan ‘khaandan’ on the show. 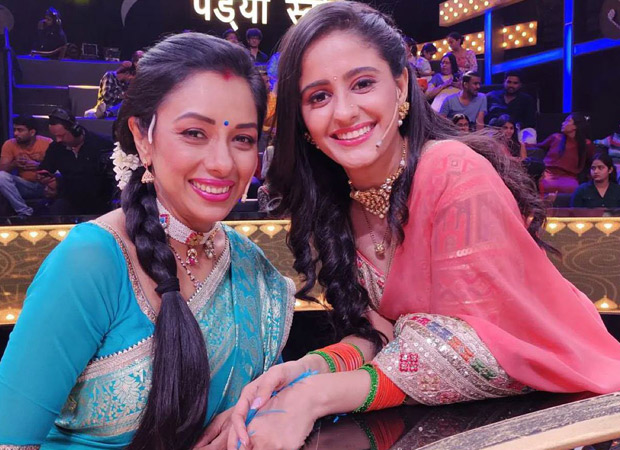 While who emerged victorious is yet to be seen, giving us a glimpse of the on the sets fun was Rupali Ganguly aka Anupamaa. In her recent Instagram post, Rupali shared a series of photos where she can be seen with the two families. While her first two photos featured her with the beloved Sai aka Ayesha Singh, the third photos featured the ladies of the Shah and Chavan parivaar, which includes Anupama, Leela Baa, Sai Chavan, Pakhi aka Patralekha, and Bhavani aka Vahini.

Furthermore, Rupali also uploaded group photos of the two families coming together and it was truly a delight for the show fans. It looks like each family had to colour co-ordinate with each other because while the Anupamaa parivaar opted for turquoise green, the Chavans chose orange as their colour.

While seeing the photos, we can see that Anuj Kapadia aka Gaurav Khanna seems to have given it a miss. Explaining his absence, his onscreen wife Anupama captioned these images saying, “Super fun shoot Ravivaar with Star Parivaar❤️ super wonderful meeting team GHKKPM ????❤️Ayesha , Neil , Kishoriji, Aishwarya and Sachin such a pleasure interacting with u all ???????? Thank u @starplus for bringing all your families together for such a fun show ???????? PS - for all Anuj Kapadia/ Gaurav Khanna fans - He was busy doing digital bytes while we were posing ???????? #anupamaa #rupaliganguly #rwsp #ravivaarwithstarparivaar #instagood #jaimatadi #jaimahakal.”

Ravivaar With Star Parivaar is expected to replace Smart Jodi from June 12, 2022 and will be airing on Star Plus and streaming on Disney+Hotstar.