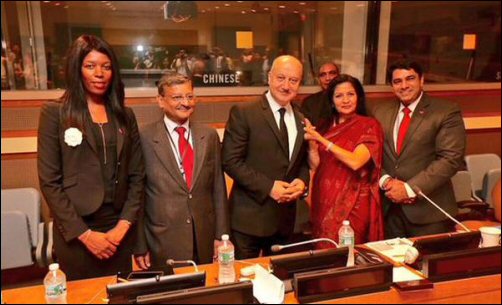 After winning hearts globally with his powerhouse performances, the legendary actor par excellence Anupam Kher, has now been named an advocate for the United Nations' campaign

on gender equality. As a part of this campaign, he will be collaborating with the world body to call on men and boys to stand up against the inequalities against the women and girls, thus, ending

the discrimination and violence against them.

Lakshmi Puri, who happens to be UN's Women Deputy Executive Director pinned Anupam Kher as a 'HeForShe Champion' at a grand ceremony yesterday. Speaking about the campaign, Anupam Kher said that he

was honoured to be named the 'HeForShe' advocate and added that one has to know as to how to treat their daughter and it should not be different from the way one treats their son. He also added

that while the men who are weak show their masculinity to women, a powerful and strong man will never ever do such a thing. Instead, he will allow the women to be powerful.