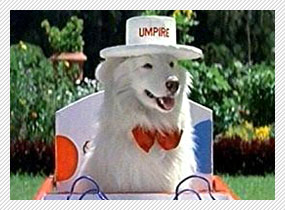 The noted writer George Eliot once said that "Animals are such agreeable friends -- they ask no questions, they pass no criticisms". We at Bollywood Hungama not just abide by his words, but also would like to add that animals, besides being man's best friends, have also secured their own irreplaceable spot in Bollywood films.

As a part of the Indian cinema's 100 years celebrations, Satish Sundaresan revisits animals that have played prominent roles in certain Bollywood films and have continued to remain become popular over the years through these movies.

Even though this doggy was named Tuffy, it was far away from being tough! It was the 'love agent' not just instrumental in Madhuri Dixit meeting Salman Khan towards the end of Hum Aapke Hain Koun, but also contributed towards the smash hit success of this film at the BO! True to the saying, every dog has its day; this was one dog who was dressed in fancy NermÃ©s scarves and D&G sunglasses in the film!

They say that a dog is a man's best friend. Well, in the case of the supernatural flick Maa, the dog is also shown helping Jaya Prada's spirit protect her child. And since he is the only one to see Jaya Prada's ghost, the dog executes her orders. All in all, the dog saves the day for one and all!

Teri Meherbaaniyaan is possibly the only film in Bollywood where the lead hero dies and the dog takes over the film! For the uninitiated, when the film's hero Jackie Shroff gets murdered by the villains, his friend played by Raj Kiran gets framed for the same. And Jackie's dog happens to be the only witness to justify Raj's innocence.

The dog helps the police trap the villains with his 'master-mind'. Also, there's a scene in the film in which the doggie mourns at Jackie's graveyard which is still considered to be a tear jerker of all times.

Never before and never after was a pigeon (read 'dove') ever presented in a Hindi flick the way Sooraj Barjatya did it in his debut romantic flick Maine Pyar Kiya. The dove not just acted as the messenger of love between Bhagyashree and Salman Khan, but also could distinguish the good and the evil (remember the climax scene where it attacks the villainous Mohnish Behl and makes him fall off the cliff).

Even during its times, this snake flick had defied all the possibilities by showing Aruna Irani breast feeding the pet snake that has been starving for two days. And when 'mother' Aruna falls into problems, her snake child 'rises' to the occasion and avenges her enemies! After all, it's all about loving your mother and repaying her 'Doodh Ka Karz'!

In a nutshell, when the film's hero Rajesh Khanna has to decide between his pet Ramu and his family, he leaves his family to choose his animal friends. That's when Ramu decides to play the peacemaker and brings his master Rajesh Khanna and his estranged wife Tanuja together, by sacrificing his own life!

Needless to say, this film went onto become one of the widely watched films of those times, courtesy Ramu and his antics. The USP of this film was indeed the relationship between Rajesh Khanna and Ramu - the elephant.

Besides Govinda and Chunky Pandey, it was this monkey who was presented as the third hero of David Dhawan's film Aankhen, a film that went onto smash all the records and created unprecedented sales at the BO windows. The monkey, in its own way, not only managed to tickle many funny bones, but also carry the film on its (hairy) shoulders!

This is one of the films wherein the then-bombshell Mamta Kulkarni, who played a college student in the film, goes to study with a pet cheetah for company! All that he had to do was to growl at the right places (read 'situations') and scare people away. Even though the 'placement' of the cheetah is a bit out spaced in this film, the cheetah does manage to deliver!