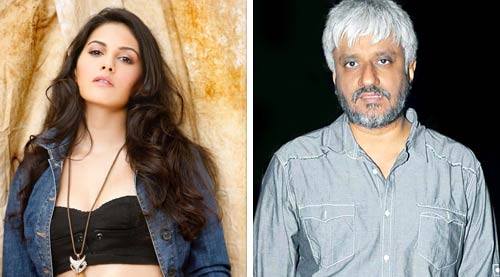 Mr. X has released and with the film, Amyra Dastur has taken another shot at a Hindi film after Issaq. Also, Vikram Bhatt has pretty much re-launched her in the industry. Since he had to step in as mentor for Amyra, one can pretty much sense the kind of pressure job he had in hand. So what made him go for her?

"The first time Amyra met me; she was so quiet and just kept on looking at me. Perhaps she was overawed with the presence of Bhatt saab and Emraan as well. Then later she met my daughter Krishna, and both of them are roughly the same edge. When I saw them conversing in their 'yos' and 'dudes' language, I knew that she was right for the part," smiles Vikram.

There was no formal screen test or look test that followed; something which is a norm in the world of acting.

There was no such consideration for Emraan Hashmi though. More so, since when it comes to Vikram's relationship with Emraan, it is expected that the shooting experience would be a breeze, considering he had launched him in Footpath (2003).

Says Vikram after a pause, "Emraan as a person is very closed. Also, he is very junior to me. I would say that Mohit (Suri) and he are friends. We get along well but we don't call each other a pal. As a matter of fact I don't know with whom do I actually share such an equation. On a different note though, Emraan is very close to (Mahesh) Bhatt saab. Whenever Bhatt saab gets a good script, he says 'yeh script Emraan ke liye hai'. That's the kind of association we all share."