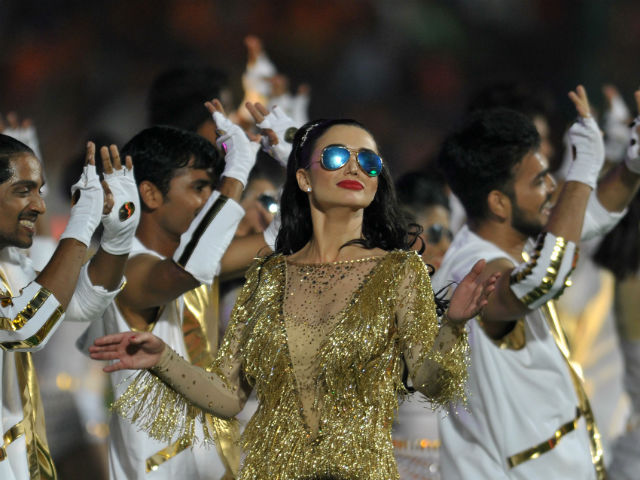 We had reported earlier that Freaky Ali actress Amy Jackson was all set to perform at the opening ceremony of tenth season of Indian Premiere League. Over the years, many celebrities have become a part of the opening ceremony. Last year, Katrina Kaif performed at the ceremony and became the talk of the nation for showcasing her insane abs.

This year, Amy Jackson was trending but not for right reason. She became the victim of trolling on social media after performed on Thursday at the Rajiv Gandhi International Stadium in Hyderabad. She performed on Katrina’s ‘Kala Chashma’ failed to spell magic on the audience. Twitterati compared her fumbling dance steps to Sunny Deol while some said she could not dance at all.

Here are some tweets:

#IPLOpeningCeremony
My dog dances better than Amy Jackson,
It's the worst of them all#AmyJackson can't dance saala

Sunny deol is a much better dancer than amy jackson

I don't know about his batting but Virat Kohli is surely a better dancer than Amy Jackson. #IPL2017 #IPL

You watch #IPLOpeningCeremony for few minutes... and even RGV ki Aag feels like a classical film & most entertaining thing on the earth.

Amy Jackson is moving exactly like I would in a Zumba class.
When the instructor isn't looking.#IPLOpeningCeremony

The format has been changed this year. Instead of one opening ceremony, there will be eight glittering opening ceremonies in different states. Riteish Deshmukh will perform in Mumbai, Tiger Shroff in Rajkot, Disha Patani in Indore, Shraddha Kapoor and Monali Thakur in Kolkata and Parineeti Chopra will perform in Delhi.

On the work front, Amy Jackson will be next seen in Rajinikanth and Akshay Kumar starrer 2.0 later this year.