Everyone is excited for Vikas Bahl's new film, Goodbye, which stars Amitabh Bachchan and Rashmika Mandanna. Now, a photo of the megastar from the set of the movie has gone viral on social media. 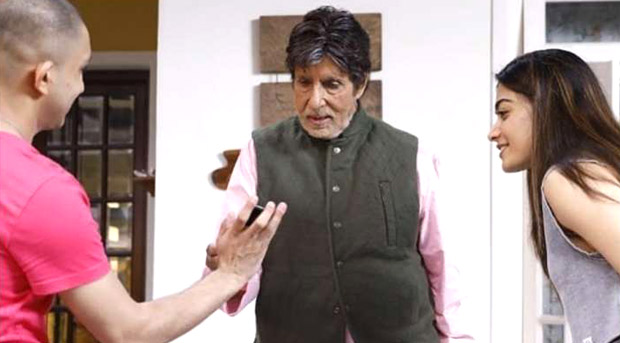 Vikas Bahl is well-known for films such as Queen and Super 30. The director is working on his next film, which is titled Goodbye. Amitabh Bachchan, Rashmika Mandanna, and Neena Gupta are among the star-studded cast assembled by the filmmaker. The film has begun filming, and netizens have got a glimpse of it.

A still from the set was leaked online. In the photo, Amitabh Bachchan and Rashmika are seen in the middle of a scene. While Rashmika is seen in casual clothes, Big B has a distinct style. Dressed in a bandhgala kurta and pyjama, Big B is seen sporting a white stubble and salt-and-pepper hair in the picture.

For the first time, Neena Gupta will play the lead opposite Amitabh Bachchan. In a previous interview, the actress stated that she has yet to begin her sequences with Amitabh and that he intimidates her. Pavail Gulati of Anubhav Sinha's 'Thappad' fame will also play a major role.

With Mission Majnu, Rashmika Mandanna will make her major Bollywood debut opposite Sidharth Malhotra in the lead role. Her second Bollywood film will be titled Goodbye. In the South, the actress is a star, and fans can't wait to see her sizzle on the big screen in Bollywood.

Also Read:  Amitabh Bachchan shares a glimpse of his furry ‘co-star’ from sets of Goodbye