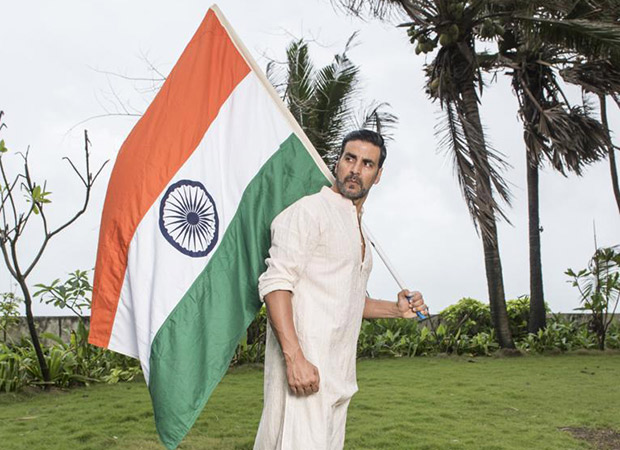 Manoj Kumar was laughed at when he would break into lengthy monologues about the pride of being an Indian. Once the satirist-comedian I S Johar had commented that Manoj Kumar rubbed the soil of the earth on his forehead with such vigour and frequency that he caused soil erosion whenever he shot on an outdoor location.

No one laughed when in Vipul Shah’s Namaste London Akshay Kumar ripped off Manoj Kumar’s entire Haipreet jahaan ki reet sadaa sequence from Purab Aur Paschim. In that film Manoj had sermonized a smoky pub filled with phoney firangis in London on the virtues of being Indian. Akshay did the same in Namaste London.

That’s where the new Patriotic Kumar was born.

That’s when AK’s marketing team sat down to re-work his image to a patriotic pitch. Not only would he play characters who are patently patriotic, he would also work towards the betterment of society by projecting a squeaky clean image …no more naughty stuff like wifey opening his pant button in public. The new desh-bhakt is heard and seen working relentlessly towards the betterment of society: paying all his taxes on time, self-defence for girls, contributing to soldiers’ welfare, emotional outburst at the Bengaluru molestation, etc.

On the work front, Akshay’s roles are tailor made to highlight nationalistic sentiments. Last Republic Day he starred in Airlift which was the story of a real-life hero who during Saddam Hussain’s attack on Kuwait, helped to evacuate hundreds of Indians to safety. The film contained lots of flag-waving patriotism, all incorporated on Akshay’s insistence.

In the 2014 religious satire OMG Oh My God, Akshay even played God, literally.

A director who has known Akshay closely in the past comments, “This image of the God-fearing country-loving sporty patriot was always his aim. When he was doing Dharmesh Darshan’s Dhadkan he insisted his character of the devoted husband be modelled on Lord Rama.”

To no one’s surprise Akshay Kumar has now decided to take over the Independence Day weekend. Its Preet jahaan ki reet treat for Akshay fans all the way every Independence Day. This means we can expect a film from him every year on August 15, just like Salman Khan for Eid, Shah Rukh Khan for Diwali and Aamir Khan for Diwali.

When told about Akshay Kumar taking over the role of ‘Bharat’ that Manoj Kumar played to exceptional success in Upkar, Purab Aur Pachchim, Kranti and Roti Kapada Aur Makaan, Manoj says, “I am glad I am compared with someone as handsome and talented as Akshay. I never intended to be a director in the first place. I became one by default when during Shaheed I had to direct the film unofficially. Then Lal Bahadur Shastri raised the slogan of Jai Jawan Jai Kisan. That’s how I made Upkar.”

Speaking of his patriotic zeal Manoj Kumar says, “I give credit for my success to my parents. My father was a poet philosopher. I came to Mumbai with two targets. One was to be a hero, the other was to make 3 lakh rupees,1 lakh each for my two parents and 1 lakh for my siblings. When I had left home in Delhi in 1956 to come to Mumbai to become a hero my father gave me a letter. In that letter he said, ‘My blood can never commit blunders, only mistakes’. I made mistakes in my career. But not blunders.”