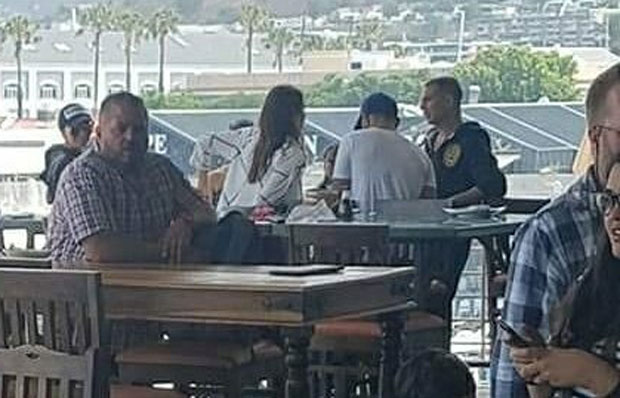 Anushka Sharma, who got hitched to Indian Cricket Team Captain Virat Kohli in a dream destination wedding in Tuscany, Italy, headed to South Africa this past weekend. As the Indian team is all set for their cricket tournament, Anushka joined hubby Virat for some downtime before both of them get back to work.

While enjoying the beautiful Cape Town, the newlyweds Anushka Sharma and Virat Kohli also met Akshay Kumar for lunch. As Akshay is also on vacation with his family in South Africa, he had a reunion with his Patiala House co-star Anushka and Virat. Akshay was not able to attend their beautiful wedding reception in Mumbai so it was nice to have met the newlyweds. Some people captured the moment as the three of them had a conversation.

Meanwhile, Akshay Kumar will return with his family to kickstart the promotions of Padman. Helmed by R Balki, the film is set to release on January 26, 2018. Anushka Sharma, too, will be heading back home to begin shooting for Aanand L Rai's Zero co-starring Shah Rukh Khan and Katrina Kaif. Virat Kohli, on the other hand, will gear up for the three Tests, six ODIs and three T20s, beginning from January 5 in Cape Town.