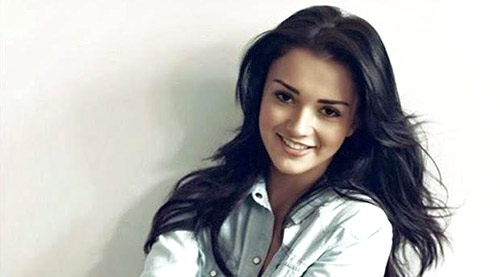 If there was wholesome entertainment package that Amy Jackson was looking at to be a part of in Bollywood, her prayers have been answered with Singh Is Bliing. The Akshay Kumar starrer with Prabhu Dheva at the helm of affairs has in the offering a complete 'masala' outing where Amy gets to do it all, right from action and comedy to of course romance and sing along. In an exclusive conversation, Amy says it all.>

Action
"I have three major action sequences in the film and the one at the interval point is huge. In fact I also have a solo action sequence where I take on 15-16 goons. Generally for actresses there are very limited options for action but I have been lucky. We had an action choreographer who helped me a lot with my moves. I trained for three months to learn Karate and MMA. I used to have classes in the morning and evening. I came prepared in April for the film's shoot.

Moreover, Akshay is the Number One guy for action; he is the action king of Bollywood. He saw my technique and wanted to know what all I had learnt. He then further guided me and told me more about how I should carry myself. He told me that it is more about attitude and confidence. That helped me a lot."

Romance
"The film has a very different kind of romance. It is a complete family entertainer and the romance too is such it blends well with the comic portions of the film. I have some amazing scenes with Akshay Kumar. Moreover, with Lara (Dutta) joining in as a translator, this kind of romance is unique by all means."

Songs
"The songs bring in a lot of fun. We shot in Punjab and that's where I saw so many colors for the first time ever. I was happy to embrace the Punjabi culture. Later, we went to Romania in order to shoot for the song 'Mahi Aaja', which is one of my favorites. People tell me that it is a very catchy song."

Dance
"We had different choreographers for each of the songs, and I believe Akshay too has danced like never before in the film. For me, it was a different experience to shoot for songs and dances again after I, which I did with Vikram and Shankar. That film had a different kind of shoot, light and art direction. The spirit and theme of Singh Is Bliing is altogether different and I enjoyed it all throughout."

Comedy
"It is a known fact that Akshay's comic timing is spot on. With Lara in there too, it adds on to the chaos and mayhem, which brings in the fun element. As a co-star, Akshay is great fun to work with. He is crazy on screen, but when off screen, he is very professional and dedicated. Still, he makes sure to keep the atmosphere at the sets light and fun."

Selena Gomez opens up about an unfaithful ex…