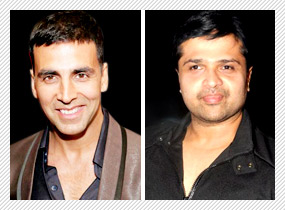 Akshay Kumar and Himesh Reshammiya may have delivered quite a few chartbusters together but the music of Namastey London stays on to be a solid benchmark for both. Taking cue from that, in his comeback film with Akshay, Himesh has incorporated elements of 'Main Jahaan Rahoon', biggest and most memorable song from the film, in the music of Khiladi 786 as well.


"This happens in the song 'Lonely (O Baawariya)' which is basically a fun song", informs a source, "While Yo Yo Honey Singh brings all the 'masti' and Himesh joins in as a singer as well, and there is a point in the song where 'Teri Yaad Saath Hai', the most popular line from 'Main Jahaan Rahoon' is heard. It was an impromptu call taken by the composer and the singer since this was also an apt way to announce their return as a team."


Says Himesh, "Yes, it was a conscious thought of me and Akshay to incorporate 'Teri Yaad' as it merged very well with this tune of the 'antara'. Honey Singh is also outstanding in the song. It's a fun song and we had a riot composing and shooting it. Akshay is in super form."


One man who is all the more happy with the developments is Akshay's friend and director of many films Vipul Shah as the move has brought back the memories of Namastey London for all involved.