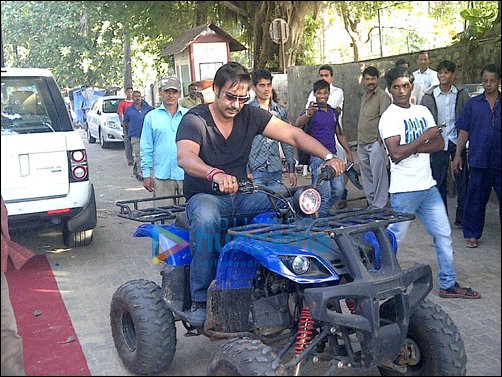 Devgn is currently shooting for his forthcoming film Himmatwala near one of the beaches in Mumbai and we hear that he has found his favorite way to commute. The place where his vanity van was parked was at quite a distance from the sets where he was supposed to shoot. So the actor decided to travel the distance on a beach buggy from his vanity till the shooting location.

Well, this is not quite new to the actor as he used to commute the same way when he was shooting for all the Golmaal movies and All the Best in Goa.

A source close to the team said, "Ajay loves beach bikes and whenever he gets a chance, he decides to ride them. He used to commute only on the buggies when he was in Goa shooting for Golmaal and All the Best, and when he learnt that the same bikes were available here in Mumbai, he did not miss the chance to ride them."