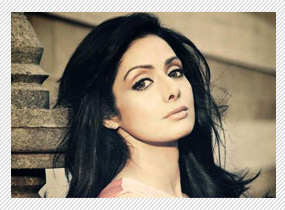 Last Friday onwards there has been a Master-class in acting conducted by one of Bollywood's best actresses. The Master-class goes by the name of English Vinglish and the actress in question is none other than Sridevi. Despite being out of the game for almost 15 years, Sridevi has impressed one and all making a stellar comeback in English Vinglish proving once again that 'Form May Be Temporary but Class is Permanent'. Critics and audiences alike have been mesmerized by Sridevi's portrayal of a simple middle-class housewife who battles odds and emerges triumphant in the end winning the hearts of one and all. Bollywood Hungama's Nikhil Ramsubramaniam chatted up with Sridevi to find out how she is enjoying all the attention coming her way post the phenomenal success of English Vinglish and much more. Sridevi fans you don't wanna miss this one so Read on...

People seem to have loved English Vinglish and especially your performance. Did you expect such a unanimous positive feedback?
Well I had a positive feeling about the film and my character but I never expected so much love and appreciation. I am quite taken aback.

Ever since the film released, it's been raining compliments, what is the best compliment that you have received?
There have been so many compliments that it's hard to pick one. I can never forget the standing ovation which the audience gave at the Toronto International Film Festival. It was simply amazing. First time in my career, I saw such a reaction from a live audience and it was really overwhelming. Even in Bangkok when we went for the premiere, a lady hugged me warmly and said she loved the film so much and asked me not to go back to India. That was heart-warming. Closer home, my husband had tears in his eyes after seeing the film for the first time and that was also quite touching.

Have you been getting any requests from people asking you for the recipe of those yummy laddoos?
Well...some people have been asking me and I tell them that I can now make the best laddoos after working in English Vinglish. I've mastered the art of making laddoos (laughs).

You are a South Indian yet you managed to portray a Maharashtrian rather convincingly...how did you manage that?
I never did any specific homework to prepare for the character. I don't plan these things. I just felt for the character of Shashi and that's why it's a genuine performance from my heart.

There are a lot of scenes which draw the applause from the audience. Personally, which is your favourite scene?
I like the cafe scenes, in fact both of them. The first time, when I go to the cafe and I am not able to order the items properly, and the second time, when I am able to place an order quite comfortably. I like both these scenes.

Your scenes especially with Adil Hussain, Mehdi Nebbou and Priya Anand have been liked a lotâ€¦tell us about your experience working with these actors.
Ohâ€¦they are amazing actors, very sensitive and supremely talented. It was great working with all of them. Half of your work-load reduces when you are working with such accomplished actors.

The English classes' scenes seem to have been loved by one and allâ€¦how do you look back at shooting those scenes?
Ohâ€¦we had so much fun shooting for those scenes. We were one big group and we actually felt like students in a class. Gauri had to shout at us asking us to behave ourselves and not fool around.

The film seems to have been loved a lot by the ladies and family audience. Do you think the theme of women empowerment is what connected with this section of the audience?
Wellâ€¦the film has a universal subject. I don't think it's only for ladies or housewives. It's also for husbands, children, parentsâ€¦in short for everybody.

There are a lot of hidden messages that the film conveys but none of it is in your face or preachy. Was that a deliberate and conscious decision?
Yes it was...sometimes you don't have to say much. You can convey a lot simply by your expressions. That's what we believed in rather than giving long lectures and being over dramatic.

How are your kids reacting to this glorious moment in your life?
Ohâ€¦my kids loved the film but my younger daughter Khushi was very upset seeing how my on-screen daughter treats me in the film (laughs).

There has been a lot of talk doing the rounds that Sridevi is the front-runner to sweep all the Best Actress awards next yearâ€¦.what do you have to say about that?
Wowâ€¦I am overwhelmed. It's so good to hear that. When I did this film I didn't think about all this, I just wanted to do good work. Seeing the love and appreciation coming my way, I am really very happy.

Finally the question on everyone's minds is what is Sridevi planning next? Are you going to be seen more regularly on the big screen?
Yes, I would be doing films but they should satisfy me like the way English Vinglish did. There are some things in the pipeline but I can't talk about it right now. I will let you guys know soon.