The upcoming song Hathan Cho is a sad romantic song featuring the fan favourite “Ankit Chauhan” and Sara Gurpal, to be released on 10th August 2022 only on the official record label “Wishlist Music's YouTube channel”. 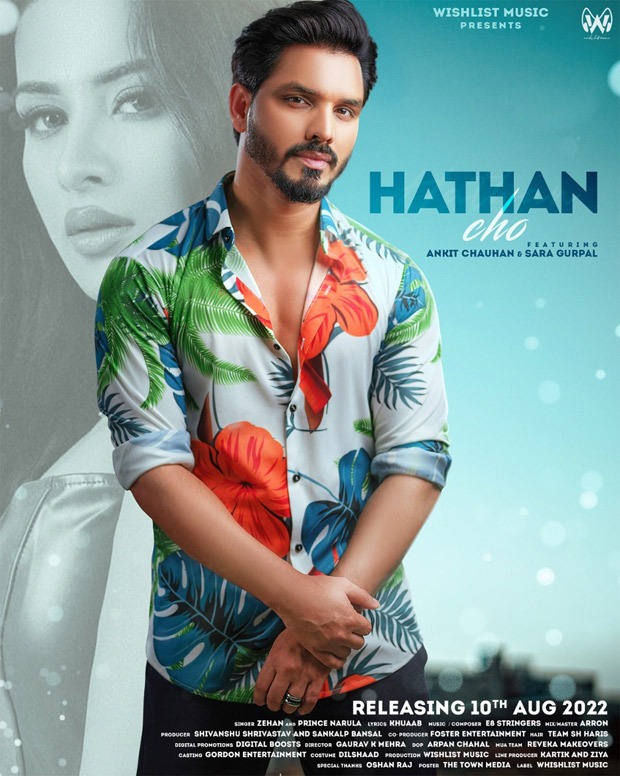 This is the season of love, romance and joy. The monsoons always bring a unique romantic vibe, encouraging many music producers and production houses to create songs that can totally sync with the current moods of people, especially couples. So far, the music industry has produced some of the most charming songs that have effortlessly touched the right chords of people's hearts. Catering to the increasing demands of listeners and music lovers, significantly in the monsoons, music labels like Wishlist Music have come forward to serve melodic songs on the platter. Actor Ankit Chauhan's upcoming song ‘Hathan Cho’, produced by Shivanshu Shrivastav & Sankalp Bansal, is touted as the song of the season to be released on August 10, 2022 only on Wishlist Music's YouTube channel (http://bit.ly/35f4puD).

‘Hathan Cho’ is a sad romantic song written by Khuaab and sung by Zehan and Prince Narula, featuring Ankit Chauhan and Sara Gurpal. Speaking on the same, Ankit Chauhan, playing the male lead in the song, says that the track is very unique as it expresses the pain of lost love. It portrays the void that has been left in a person's life, a void they aren’t able to fill. It is the authenticity and specificity of the feeling after the death of one's true love and the memories that haunt them. Producers Shivanshu Shrivastav & Sankalp Bansal add that music and composition by E8 Stringers and music mixing and mastering by Arron have added more magic to the track.

They recall how fun it was shooting for the song directed by Gaurav k Mehra, who has captured the deepest emotions of actors Ankit Chauhan and Sara Gurpal and their crackling chemistry, capable of making audiences feel the pain hidden in the song.

Ankit Chauhan, with the song co-produced by Foster Entertainment and made under Wishlist Music in association with Winning Records, proves the incredible actor he is and how he possesses the innate skill to make audiences feel one with the song. He says, “It was so much fun while shooting this video. The credit goes to the whole team that did an excellent job and I’m super happy with the final product, Without them this project wouldn’t have been possible”.

Audiences and his fans can't wait for the song to drop soon. The poster for the song was dropped on August 2, which caused a massive surge among the fans.

Producer Sankalp Bansal says, “I was overwhelmed with the response we got when we first launched the poster for this song, I am extremely thankful for our loving fans who made sure to shower us and make us believe what we are doing is being appreciated by the masses. We are more than dedicated and focused on delivering the best of tunes. I hope everyone enjoys what we have in store”.