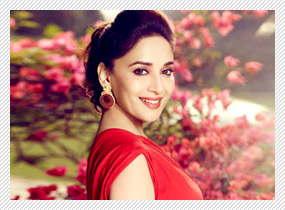 It was more than a couple of decades ago when Madhuri Dixit had showed her ferocious avtar in Beta. In the portrayal of a strong independent woman, Madhuri had made many a soul acknowledge and recognize her talent further, especially in the times when women centric parts were hard to come by. Now that she is stepping into the mode of women empowerment all over again, audience is all set to be reminded of the manner in which she had taken on Aruna Irani, her on-screen mother-in-law in Beta to task.

Laughs Madhuri, "Well, I am still reminded of the face-off that I had with Aruna Irani had in Beta. I can assure that the kind of action-drama that you would see in Gulaab Gang is many steps ahead. There it was more of dialogue-baazi whereas here, there is a lot more action added to that as well. I am literally fighting here with hand to hand combat. As for the verbal dual, there is a lot of it with Juhi Chawla and I upping the ante."

While so much has been said about her and Juhi coming together on screen and their rivalry being revived, Madhuri promises that a lot of surprise would be in there for those who have waited for so long to see the two actresses together.

"I was already on board and when I heard that Juhi is playing the main villain in the film, I was happy," says Madhuri, "What matters most is that the film is trying to say so much which is relevant in today's time; that is actually the number one factor for me to be doing the film. Then there is a lot of action in there. I could see that this is a very commercial package that wins the deal for Gulaab Gang and all involved in there."

Incidentally, this is yet another film since Aaja Nachle and Dedh Ishqiya where she is working with a filmmaker who had had little or no background in film direction. Considering the fact that there would be so many of her loyal filmmakers from the 80s and 90s who would be looking at making a film with her, is there a probability of her joining hands with any of them in quick time?

"It all depends on the script and the frame of mind that I am in. Honestly, it is not that I want to work with people with whom I had worked in the past just so that it recreates the magic from the past. Frankly, it doesn't work this way. Today when an Abhishek (Chaubey) or a Soumik (Sen) comes to me, there are so many new ideas that they bring along with them. The way they present women on screen is so very different from the others. It is exciting to be collaborating with them."

Urvashi Rautela looks stunning in the…