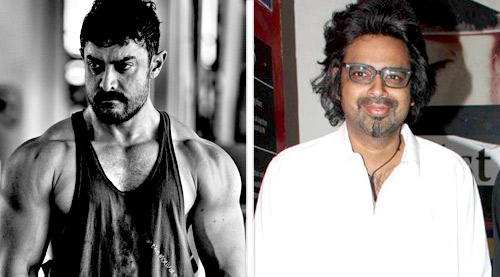 Master Photographer Avinash Gowariker in a Bollywood Hungama exclusive video interview with Content Head Broadband Faridoon Shahryar shared his thoughts on the recent pic of Aamir Khan clicked by him for the younger Mahaveer Phogat look. Gowariker owes his career to Khan and lauds his judgement in choosing the right picture out of the many pictures clicked by him.

How do you react to the reactions that the viral picture of Aamir in the younger Mahaveer Phogat avatar has got?
I am actually quite taken aback. It is something unique that Aamir has done, no doubt. The maximum likes I may have got for my pictures on Instagram would be 1500-1800 or maximum, 2000. This picture however has got some 15000 likes! Even this picture, that is tweeted by Aamir, has got 21000 likes while his tweets generally got around 10000 likes. It's just connected. I am just lucky to have shot it!

I believe the picture was posted a day after it was clicked…
Yes and this is where I really admire Aamir. He's the one who gave me a career and made me a photographer 20 years back. His judgement and instinct about certain things is amazing. He told me that he's working out at Taj Lands End Hotel and he wants me to do his body shot. I naturally went with my assistants, lights etc. But he was adamant that I can't get anybody with me and that he wants me only with my camera and no lighting. I explained to him that I might need to do contrast lighting since it's a body shot but he refused to budge. We clicked a few pictures and I only take credit for placing him at the correct angle because lot of daylight comes into the Taj Lands End gym. He said that he didn't want to do a pose-y shot and wants me to click a picture when he's working out. The problem is that while working out, a man doesn't look good! So I decided to click a picture when he's a bit relaxed with his dumb bells. Again, he refused to let me do any touch up in the picture. But he insisted that the picture has to be the way it is. Then I asked if I can post something else while he can post the pic he finalized. But again he made it clear that only one image will be put up. He explained that, 'There should be just one signature image. I have been very overweight. All my pictures in the last few months have been me having a weight of 96 kilos. I am working out now and want to share this image with everyone.' And then he posted it and it just went viral. I'll be honest; it was not my choice of picture.

And I believe the rustic and realism element also was important…
Yes and you know, when he works out, he wears a cap. Some American Stuntment Association has given him that cap and Dhoom 3 is written on it. I requested him that, 'AK, bas itnakar mere liye ki tu woh cap hata de.' That's my only contribution. He then ruffled his hair and also if you notice, his beard is slightly grey. It's all in context with the film.

The determined look he has on his face is also something that makes a huge impact…
I meet him all the time. It's not a quick weight loss on his part. It's taken him 4 months. According to me, he has lost 16 kgs. He has done that in a faster period of time but at the same time, he has built his body which is kind of impossible to do. That is crazy amount of hard work. You can either lose weight or make muscles. But he did. In the last 1 ½ months, he has worked out a lot. My back started paining just watching him. He was doing 150 kgs dead weight. As for the look, he is just critically looking at his body. I should not be breaking the myth but he's actually looking at himself in the mirror!

Can we see this picture as a part of publicity stills of Dangal?
I don't know. He's the guru of marketing. But I don't think he can use it now. So many people have already seen it. It won't have a surprise element

Do you think that the director in him propels him to make the correct judgement?
He just knows himself very well. Secondly, his instinct about certain things is very strong. He has been like this since the time I know him. So more than the director on him, it's the fact that he knows himself and is very instinctive. Also, he does take advice. He looked at the picture that I liked more. But then he chose the one that he liked. And he was right in choosing the picture. I am just at right place at the right time. I am just glad that I didn't screw up!